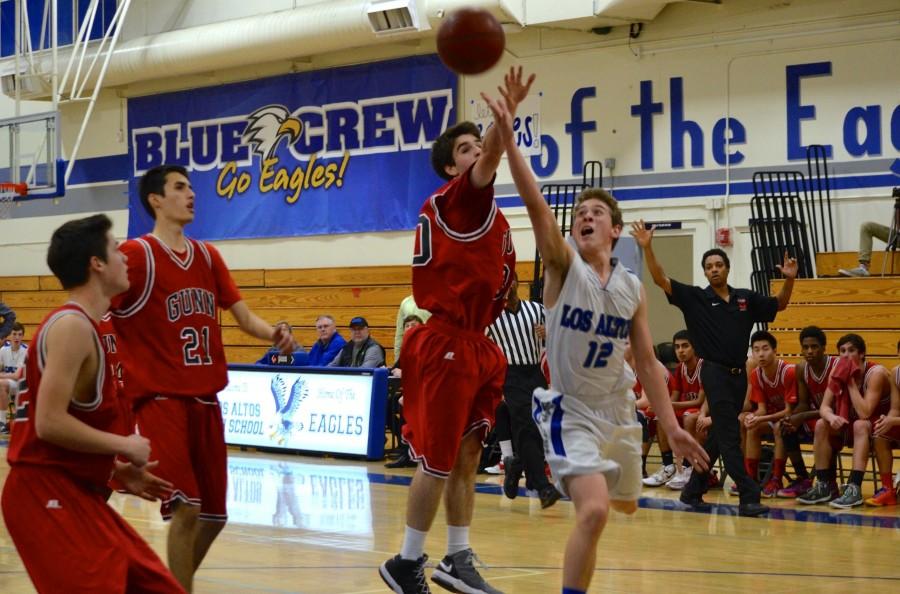 The boys basketball team suffered a painful and frustrating loss against the Gunn Titans on Wednesday, January 27. Although the Eagles put out a new starting lineup in hopes of a different result in comparison to their previous games, they lost 55-37 to drop to a record of 1-5 in league and 9-9 overall.

In the first quarter, Gunn proved why it was one of the stronger teams in the league from the start, nailing a three-pointer within the first 30 seconds and executing a strong defense that pressed the back court, holding the Eagles scoreless as it jumped out to a 7-0 lead. The Eagles didn’t score a field goal until sophomore co-captain Nolan Brennan scored a layup more than five minutes into the first quarter. A three-pointer on the next possession made the score 10-7 Gunn. The mini run for the Eagles sputtered though, and more turnovers let the Titans widen the gap to 17-8 at the end of the quarter.

The Titans pulled away in the second quarter going on a 8-0 run at the start to reach one of their biggest leads of the game of 17 points. Wide open in the middle, Adam scored an easy shot and first of the second quarter at 5:15. Later on, Nolan started to drive but then found and passed the ball to junior Aidan Keller who was open next to the basket and scored. The Eagles and the Titans exchanged points all throughout the quarter, and with 17 seconds left, junior Tommy Andrews made a three-pointer to end the first half with the Eagles down 33-21.

Overall, the Los Altos gameplay improved in the third quarter, in which they attempted a comeback and reduced the Titan’s lead down to single digits. After Gunn converted a three-point play, the Eagles went on a 7-0 run, sparking a flicker of hope on the Los Altos bench. When sophomore Matt Eberle hit a three to narrow the deficit to 37-33, momentum, for once, was squarely on the Eagles’ side. However, the quarter ultimately went to the Titans, who ended the quarter on a 4-0 run to take a 41-33 lead.

Although the Eagles proved they had some fight left in the fourth quarter, they were only able to muster four points in the final eight minutes on points from Matt and sophomore Jake Shab, and the Titans came out on top 55-37.

Despite the tough result, the game presented obvious bright spots and areas for improvement for Los Altos.

“Overall we played a good game versus a very good team in Gunn,” Matt said. “We were in it the whole game and what it came down to was us beating ourselves. We had some plays that were just mental mistakes and if we limited those, the game might of turned out differently. We always play hard and show the effort but if we can cut down those unforced errors, we can make a run through the second half of the season.”

The Los Altos’ next game is Wednesday, February 3 at 7 p.m. at Fremont. Their next home game is Friday, February 5 against Palo Alto at 7:45 p.m.