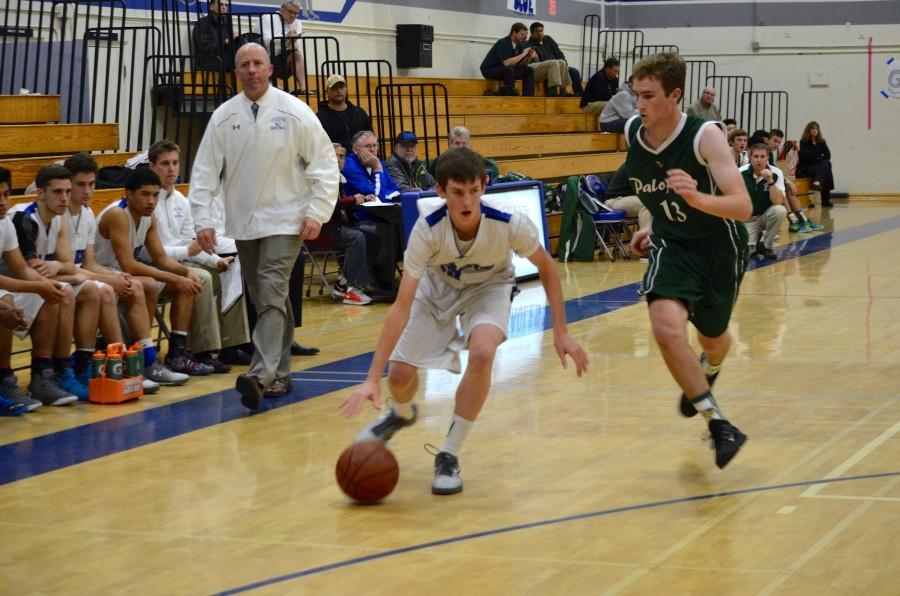 Sophomore Matt Eberle dribbles the ball past a defender. Photo by Kunal Pandit.

“We needed 32 minutes, but we only got 28,” boys basketball head coach Bob McFarlane said.

In other words, the Eagles were only four more minutes of quality basketball away from getting the win tonight versus the Palo Alto Vikings. Unfortunately, the Eagles will have to live with a loss, as the team fell to Palo Alto by the score of 40-36.  This loss gives the Eagles a 2-6 record in league, something they will definitely be looking to improve on.

With both teams having a losing record in league, there was a common understanding of what was on the line tonight: A chance to make a statement and turn their season around. Three minutes in, Palo Alto jumped out to an early lead.  However, after three-pointers from junior Adam Rosenbaum, sophomore Nolan Brennan and sophomore Matt Eberle, the score was tied at 12-12 at the end of the first quarter.

Alluding to what McFarlane said, the four missing minutes happened in the second quarter, ultimately deciding the game. After an early three from Matt, the Eagles failed to score the rest of the half.  Los Altos suffered from a combination of unforced turnovers and missed multiple opportunities on the offensive side of the ball.  This led to an 11-0 run from Palo Alto, which gave them a 28-15 lead at halftime.

“That second quarter really hurt us,” junior Tommy Andrews said. “I think it was a lack of composure. They got a little bit of momentum and we let them control the game.”

After regathering themselves during halftime, Los Altos started the half on a mission to mount a comeback.  Yet, almost immediately, the mission seemed improbable as Palo Alto converted a three-point play to take a 33-19 lead. That said, Los Altos rebounded to the delight of the home crowd. They found their success by feeding the ball to sophomore Simon Heck in the post.  Simon had a huge third quarter with 8 points and led the comeback charge. With three minutes left in the quarter, the Eagles began to apply a full court press on defense. This tactic proved effective as Los Altos was able to cut what was once a 15 point lead, down to four at the end of the quarter.

“[We] focused on what we did rather than adjust anything,” McFarlane said. “We started executing what we needed to do strategically.”

Entering the fourth quarter, both teams knew that there was no room for error. This was apparent in the energy on the defensive side of the ball. The two teams scored a combined four points in the fourth, showing how neither team was willing to give up an inch. With a minute left, Los Alto found themselves down 40-34 and in need of something special. Unfortunately, it was not their night and Palo Alto was able to close out the game.

There was controversy, however. With 25 seconds left, down four, Los Altos still had hope of doing the improbable.  As the team moved the ball around the offensive zone, McFarlane noticed that the Eagles were not getting a good look and tried to call a timeout. To the disbelief of McFarlane, the referee didn’t see him and the time continued to tick off the clock. When the referee finally did call the timeout, it was while Nolan was in the process of sinking what would have been a vital three-point shot to cut the deficit to one. Needless to say, the shot didn’t count and McFarlane was not happy.

“Every time I went to call a timeout they weren’t looking at me,” McFarlane said. “It bothered me because it was a pivotal moment of the game and they missed it.”

The Eagles will look to change their fortune against Wilcox on February 10. Their next home game is against Los Gatos on February 12.