Boys Basketball Ends Season in First Round of CCS 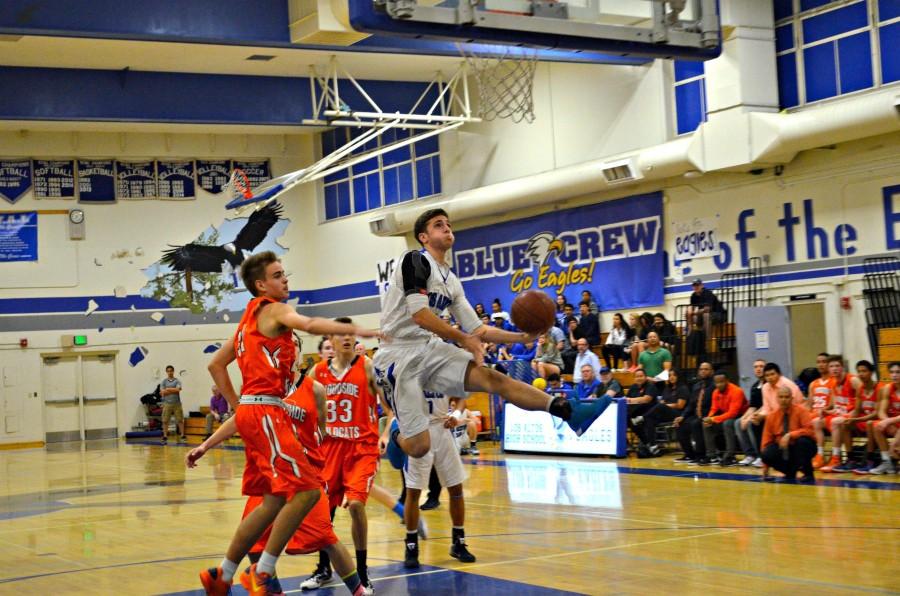 Senior Bailey Thayer jumps up to make a layup. Photo by Kunal Pandit.

With the end of the season on the line and looking to pursue back-to-back CCS championships, the 9th seeded Los Altos Eagles’ boys basketball team fought to advance to the second round of Division 2 CCS against the unseeded Woodside Wildcats. However, it was the Wildcats who won the emotional battle eliminating the Eagles from CCS.

It was clear in the first quarter that the game would be a close one. Woodside immediately took the lead 0-4 until junior Ahmad Washington came out with a three-pointer to keep the score close. Sophomore Nolan Brennan proved to be a dominant player as well, adding a few buckets to the score. However, it was senior Kenneth Hamel who led Los Altos’ offense after scoring 10 points in the quarter including a three-pointer with three seconds left to trail Woodside 20-23 at the end of the first.

In the second quarter, Woodside’s height proved to be too much for Los Altos to handle as they pulled ahead, capitalizing upon every mistake made by the Eagles. Ahmad led the Eagles in scoring that quarter with four points followed by three from junior Adam Rosenbaum. Woodside ended the quarter with yet another three-pointer and ended the half leading with a score of 31-43.

Going into the third quarter, Los Altos failed to lessen the lead despite Ahmad scoring nine points in the quarter. Woodside’s dominance continued with their ability to get offensive rebounds and connecting on all of their shots as Los Altos’ defense began to falter.

Drama and high-intensity from both the court and the crowd seemed to make the fourth quarter last much longer. With 4:35 left in the quarter, Nolan saved the ball from being a turnover and received it right after to make a clutch three-pointer bring Los Altos within five, making the score 57-62. In an effort to save their season from its end, the Eagles found themselves all over the place whether it’s in the bleachers, on the ground, and even in the faces of the referees.

With half of the quarter remaining and their seasons coming to an end, the Eagles’ attempt to fight back failed as they lost 57-73. Watching the game, you could blame the result on the referees for their ‘biased’ calls or Woodside for being a better in team in general. But the Eagles, showed everyone the passion they had for the game and for their teammates.

Head coach Bob McFarlane certainly recognized the team’s talent and improvement throughout the season despite being a younger team in comparison to others.

“It’s just a great group of guys,” McFarlane said. “The challenge for us this year was consistency throughout the game and that really plays on the overall youth of our team. We’re just very young, our primary guys are sophomores and juniors and it takes a lot of discipline to run a full system for 32 minutes night after night and I’m really confident that these guys will be great at it as we get rolling, but you take your lumps when you’re young, so we’ve certainly took them this year.”

With the team’s official league season over, the boys basketball team looks ahead from its 11-13 record to the future.