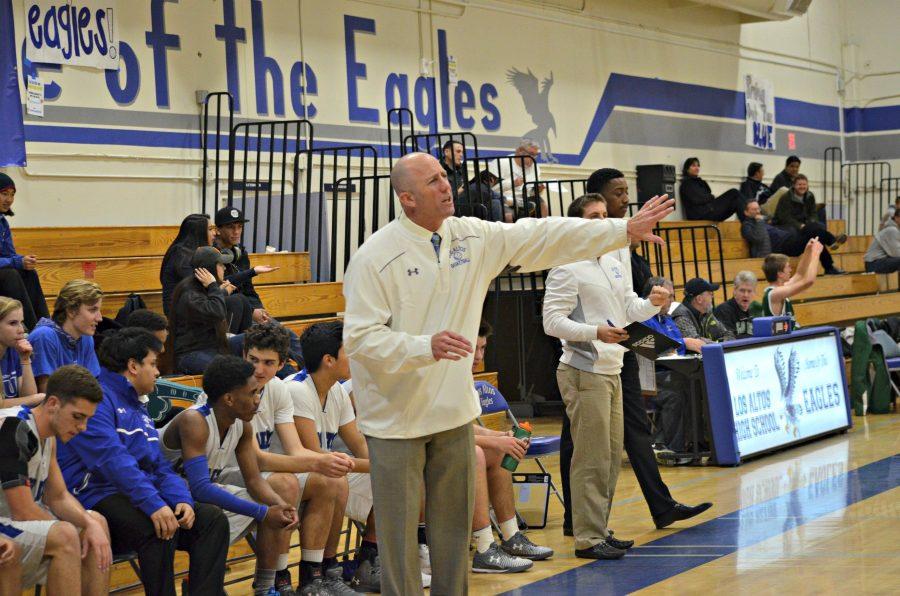 Basketball coach and P.E. teacher Bob McFarlane announced his resignation from his role as the boys basketball head coach Monday, April 18. McFarlane’s resignation marks the end of an era for a program that has achieved unprecedented success during his tenure, peaking with the team’s first-ever CCS Championship victory last year. McFarlane was involved with the basketball program in various capacities for 12 years, including the last four as varsity head coach.

“I [loved] it,” McFarlane said. “It’s all I ever really wanted to do. My career goals were to be a high school teacher and a high school basketball coach… I plan on being involved down the road, but right now I need a break, and I need to let someone else manage all the headaches.”

McFarlane decided to resign due to the unexpected success of his business, a summer sports camps for kids known as Bald Eagle camps, and a desire to spend more time with his family. Between expanding Bald Eagle, teaching full time at Los Altos, raising three kids and managing the basketball program, McFarlane found himself unable to fully commit himself to any one project.

“I’ve been struggling to do all the things that I do for two years,” McFarlane said. “The problem is I run a business, that’s almost a full-time business, on the side. I also have three little kids who are [going to be on sports] teams and programs and really wanting to be around me… I’m their hero for the next six years until they realize the cape isn’t really there. That’s what happens with all kids at certain ages so I’m going to fly around with that cape a little more before it comes off.”

Although McFarlane was struggling to keep up with his increased workload, it was still a tough decision for him to leave his head coaching position, with his love for the team still as strong as ever.

For McFarlane, the most important part of coaching was not winning and achieving success, but helping his players improve, not just as players, but as people. He says watching the progress and maturity of just a single player over four years is worth more to him than any CCS title, and that experience is what he will miss the most from his coaching days.

“You do it for the relationships and the growth and what you see in terms of the development of a boy over four years,” McFarlane said. “Then he graduates as a young man. There’s a lot of changes in that time frame and you see a lot of guys turn the corner: you see a lot of guys work through their issues and their challenges and really become a young man who is more confident and more aware of who they are. That’s what warms me, that stuff means more to me than a CCS title.”

While McFarlane will no longer be in charge of shaping and developing every aspect of the program and able to watch this transformation firsthand, he still plans to stay involved.

“I’m still a full time teacher here,” McFarlane said. “I love teaching here. I plan on coaching the boys, helping out in any way I can. I just can’t be the head coach…. When you’re not the head coach, it’s a lot more flexible. I just can’t be that point person who’s responsible for everything that happens. I’ll still be standing there watching the games and paying attention and helping them where I can help. I can yell all I want now because I won’t be on the bench.”

McFarlane’s successor will be decided by a committee consisting of himself, athletic director Kim Cave, a player, an administrator, a parent, a teacher and an athletic booster. The open application for the position is going to be posted today, April 20, and will close after two weeks. After the window expires, applicants will be interviewed by the committee, which will ultimately make the decision for the upcoming year. Although the change will certainly be hard on the team, McFarlane believes he has created a strong enough foundation for the team to continue its success with a new coach.

“They have the potential to be a very good team,’ McFarlane said. “It just depends on how they come together and whether they will buy into what the new coach [brings]. For some of the guys it’s really hard, they’re really upset about it. For other guys, I think it’s always good to get a fresh voice, especially if we can get someone who knows what he’s talking about to say things in a new way that helps the boys turn new corners. Some of them have been with me for two years now, so I think the change will be nothing but refreshing.”