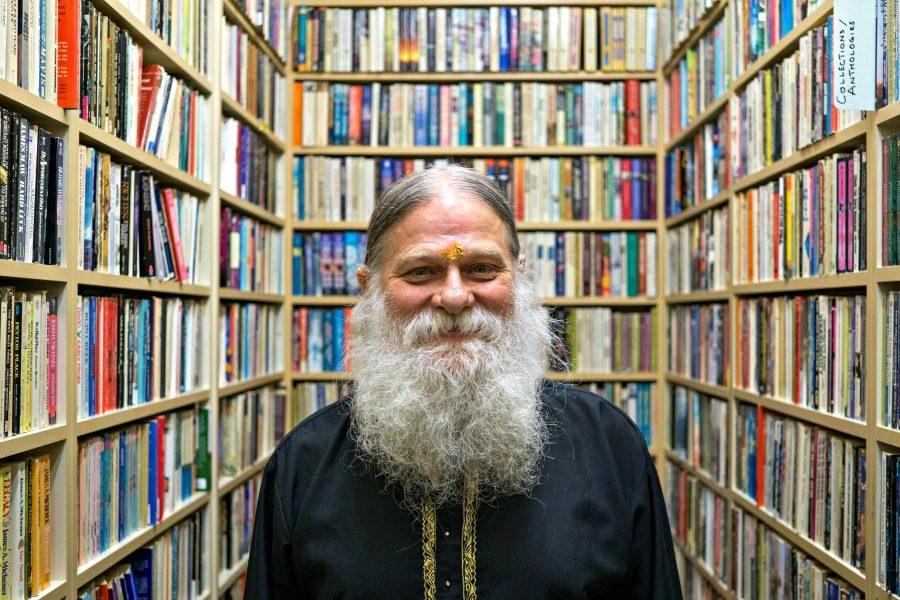 Hotranatha Ajaya, owner of Book Buyers on Castro Street, in one of the aisles of his bookstore. Ajaya began his life in a strict, Christian fundamentalist family, but later converted to Hinduism, which has grown to become a key aspect of his life. Photo by Michael Sieffert.

By Katherine Yen and Michael Sieffert

Book Buyers owner Hotranatha Ajaya is 73 years old and still spends 15 hours a day working in his used bookstore. He loves chatting with customers and radiates a quiet, gentle presence wherever he goes. But before he became the owner of a used bookstore, Ajaya led (and still leads) a most unconventional life.

Born in 1943, Ajaya grew up in a strict, Christian fundamentalist family on the outskirts of Oklahoma City and attended a nearby college, majoring in music education and learning to play the French horn. This proved especially fortunate when Ajaya, a self-described pacifist and conscientious objector to war, received a draft notice in 1966 for the Vietnam War. He was able to avoid becoming a soldier by joining the Air Force Band instead and playing his French horn.

After his release from the service in 1970, Ajaya found a combined teaching and research position at Edinboro University in Pennsylvania. It was during his seven-year tenure there that he stumbled upon the book, “Autobiography of a Yogi.” Until that point, Ajaya had rebelled against the fundamentalist religion he had been raised in, but was unsure what new faith to follow.

“When I read that [book], I said, ‘This is my religion. I finally found it!’” Ajaya said. “[Its] teachings satisfied my heart completely.”

Ajaya’s interest in Hinduism only deepened after he attended a yoga session and got the surprise of his life.

“They had us lay down in dead man’s pose, [called] ‘Sarvangasana,’” Ajaya said. “And I went into a very deep meditation spontaneously and unexpectedly… There was no world, there was no body. It was like being in a clear place. I almost didn’t retain that I’d had that experience, it was so far removed from the mind… A once in a lifetime experience. That changed my life. I started practicing yoga five hours a day, right away.”

During this same period of time, Ajaya and his wife bought 42 acres of property in upstate New York and tried to start a community that eschewed societal norms such as traditional schooling and nursing homes. The members would support each other by doing their own gardening and being as self-sufficient as possible.

“[My wife and I] worked really hard on that,” Ajaya said. “Everybody who came loved the idea, but then when they saw how much work I was doing to get it started, they said, ‘I’ll be back when you get this finished.’ I was so amazed that they’d say that [because I thought] they loved the idea so much.”

Ajaya continued to practice Hinduism and developed a strong interest in finding his true spiritual teacher, or “satguru.” In 1978, he and his wife packed up and headed across the country to what he describes as a “quasi-Hindu” community called Ananda in North San Juan, California. He remained associated with the community for 10 years, teaching in its school, running its goat dairy farm and making tofu for the local Chinese restaurants.

He then joined a spiritual nonprofit organization in Santa Cruz called the Society of Abidance in Truth and stayed for few years before reconnecting with an old friend from Ananda, who worked in the Ananda-owned Book Buyers store and offered him a job. Within a year, the two had expanded the store so much that the Ananda Church sold it to them.

And there Ajaya has remained for the past 18 years. It’s the current chapter of a long and unconventional life, one characterized by a quietly stubborn determination to live by his own beliefs.

The strength of Ajaya’s beliefs is particularly evident in the unorthodox approach he took toward the education of his two daughters. While at Edinboro University, he found himself amazed by what kids could achieve without pressure from adults and began to reject the notion of sending kids to school.

“[I wondered,] ‘Why are we making kids do all these things when they’re so willing to learn [on their own]?’” Ajaya said. “I began to develop a theory I called natural education. I still believe in it today… My theory was, if we want children to do math, let’s see all the adults being interested in it, playing with it, investigating it, questioning it and sharing it… That is enough to get it done.”

So Ajaya never sent his daughters to school, instead choosing to read to them at home and allowing them to learn naturally. They were raised Hindu and attended various outside classes to supplement their education: “Bala Viahar” (essentially Sunday school for Hinduism), Indian classical dance, carnatic classical vocal music, swimming, gymnastics and painting.

“They learned by doing,” Ajaya said. “We didn’t try to teach them anything…We read to them everyday and they spontaneously began to read… I was confident that they would learn without having [formal schooling], and they did.”

By all accounts, things have turned out well for Ajaya and his family. Yet one worry still lingers. On Tuesday, May 31, Book Buyers will move out of its current location on Castro Street in downtown Mountain View. The move comes after years of struggling to keep the business afloat, especially after the 2008 recession.

“Our landlady’s been very great,” Ajaya said. “She actually lowered the rent so that we could survive. And so it has to actually go back to normal… Book business is very difficult because people aren’t buying from bookstores so much, so our sales are seriously depleted.”

Ajaya has not yet found a new store location. In spite of the uncertainty, Ajaya says he’s never been happier in his life.

“What I’ve discovered about life is that adversity wakes you up [and] forces you to learn and work harder,” Ajaya said. “It’s unpleasant to have a bill I can’t pay. It’s extremely painful. But… that doesn’t mean that pain and happiness can’t be right there together. I’ve lost a lot of fears [and] being free of fear and anger is by definition happiness itself. That’s why I say it’s better than ever.”