Bethesda’s ‘Fallout 4’ lives up to the hype 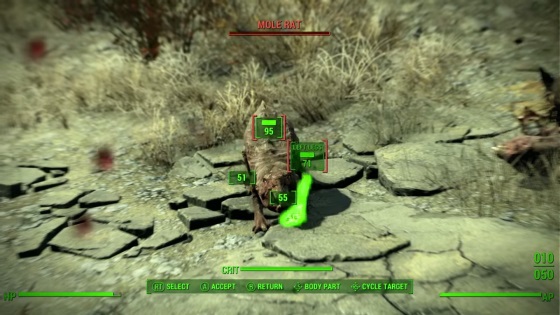 There are few games that allow players to smack mutated enemies with a baseball bat one moment, then place beds around a town they control the next. In fact, Bethesda Softwork’s “Fallout 4,” released November 10, may be the only game in existence to feature this diverse array of gameplay. Once players get a taste of the freedom “Fallout 4” offers, they may never leave the wasteland.

The game takes place in the year 2287, exploring an alternate reality in which America has been devastated by World War III and in a state of “nuclear holocaust.” The power of this setting lies in its believability, which explores the terrifying but real possibility that human greed can lead to the end of our race. Located in Boston, Massachusetts, and the city’s close surroundings, the game map is both massive and filled with detail. Everything is in ruins, stained with nuclear waste and strewn with bodies of recent victims of the toxic wasteland.

The main character is a survivor of the war, alive as a result of 200 years of cryogenic hibernation. At one point during this period of time, the character is awoken to witness the murder of his wife and kidnapping of his son, then put back to sleep. The second time he awakes, he sets off into the wasteland driven by his urge to find his son and his burning desire for revenge on the unknown assassin.

Witnessing how the main character is exposed to the abstract cultures, dangers and conflicts of the wasteland are one of “Fallout 4”’s biggest highlights. The protagonist is forced to adapt to a new lifestyle, from dealing with radiation to deciding whether or not the next intelligent creature he meets is sane. The character encounters several factions, from the noble Minutemen to the mysterious Children of the Atom cult. Each faction has a unique way to survive in the wasteland, and moral struggles ensue as the player begins to understand these factions all believe they are following the best steps to ensure humanity’s future. Resolving these struggles requires the player’s critical evaluation of just how corrupt their ideals have become.
The story is more than enough to keep one occupied for a long time, yet “Fallout 4” goes above and beyond by including a vast amount of engaging sidequests. It is impossible to travel to a new destination without discovering a multitude of new locations to explore, enemies to conquer and additional quests to pursue.

“Fallout 4” offers enough styles of play to suit anyone. From the traditional first-person-shooter perspective, the gameplay feels continuously fresh and exciting. However, the player can also take a more tactical approach, delving into the deep crafting system, upgrading the role-playing-game elements and slowing time to analyze an enemy’s weak points limb-by-limb. No matter how many hours players sink into this game, they can always expect to find something new.

Addicting gameplay is only the beginning of “Fallout 4”’s many successes. The characters are well-developed, each with their own set of believable flaws, personalities and backstories that add depth to the plot of the game. A wide selection of characters are available to be the player’s “companion,” meaning they follow the player and assist them during missions. Each companion is brought to life through the unique ways they react to various situations. Stray too far from what they stand for, and they will leave on their own accord.

In terms of outstanding characters, the player’s own is no exception. Starting with the choice of being either male or female, there are a myriad of ways to embody any role possible. The character creator is decent, although a little overwhelming and unintuitive. It takes time to figure out how to perform minor edits on the character such as changing skin and hair color. The option to mold the character’s face by dragging certain facial features around seems interesting, but far too complicated to even consider using.

Customizability goes beyond mere appearance. Unlike many first person games, in which plot-progressing dialogue is merely portrayed through video cuts, the player has control over how his or her character reacts to situations or speaks with others. The decisions because increasingly weighty as the game progresses. Several moments will likely leave players tensely moving their cursors back and forth over contrasting choices that determine who lives and dies. The most ingenious element of these choices is that the consequences only become apparent some time after they are chosen, and when they do the players have only themselves to blame.

Unfortunately, “Fallout 4” falls flat in regards to the core tech powering the game. The game looks dated, especially when compared to some of this year’s beautiful releases, such as “The Witcher 3,” that are setting the new standards for the industry. The draw distance on PC is impressive, but this does not make up for the low-resolution textures and finicky animations, and the heavy frame drops that occasionally interrupt hours of previously fluid frame rates. The engine feels similar to ones used in previous Bethesda titles, such as Skyrim and Fallout 3; it plays a little clunky but has benefited from years of refinement. In traditional Bethesda fashion, the game has its share of glitches, though they usually prove to minor to detract from the overall experience.

All in all, “Fallout 4” proves yet again that Bethesda is king of the open-world RPG. The latest entry in the Fallout series does the legacy of the previous titles justice, and is a must for fans of both the FPS and RPG genre. While nuclear radiation seems to have rusted the game’s graphical appearance, the outstanding elements of gameplay, setting, story, and character prove there are more to games than just their looks.