Behind the Scenes of Broken Box 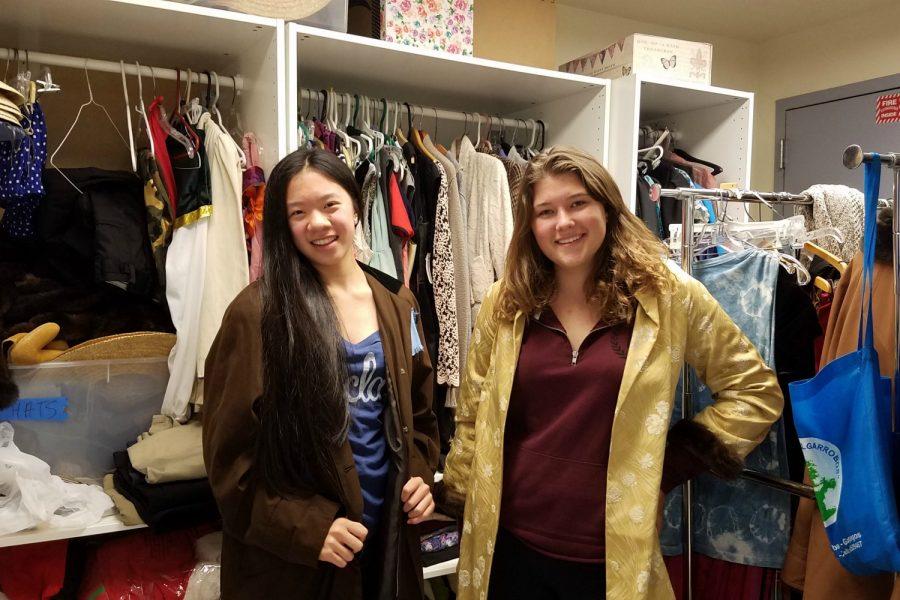 It’s easy to imagine the costumes for a high school play being thrown together by a director after a couple read-throughs of the script, but for Broken Box, costume design is an art form and furthermore, a key element in the production of each show. The costume design department is student-led and works to bring a performance to life through costume and makeup looks. Without their work, the characters would be visually incomplete and the actors would be significantly less effective at delivering their roles.

Broken Box’s lead costume designer this year is senior Selena Weltz, and she is aided in the job by her assistant sophomore Allison Wang.

“I think the tech people put a lot of work into the show, and we don’t necessarily get as recognized as the actors because we aren’t on stage,” Selena said. “Everyone’s part in the play process is really important… as long as everyone does their job, it goes really well.”

Allison will be taking over the department for next year once Selena graduates. Broken Box has three major plays a year, with the assistant’s responsibilities increasing with each production.

“Over each play, I’ve been taking on more responsibility as a costume designer,” Allison said. “The first play was mainly Selena pioneering through it and I was just there to help… The second play was more 50-50, and I put more of my opinions. For [the last play] I had a lot more authority.”

Both Selena and Allison agree that their interests in fashion and design are what initially motivated them to apply for their positions.

“As a kid, one of my favorite holidays was Halloween, and I really loved costumes and dress-up,” Allison said. “I also liked to learn how to sew and those kinds of things, and I’d make my own costumes for Halloween… I realized that I really liked theater, but I didn’t really like acting, so when I heard Broken Box has tech positions, I looked into costuming and decided to go for it.”

Some plays are far more difficult to come up with costumes for than others. Last year, Selena worked on a play called “The Birds.” The costume designers had to design elaborate outfits by sewing together patterned fabrics and gluing on feathers, a process that became stressful at times.

“We had bought all the stuff beforehand but we hadn’t actually made any of the costumes yet,” Selena said. “During [Broken Box’s] tech week, every single night from beginning to end, we were just on the floor making all the costumes, gluing everything, and it was super stressful… Coming up with how to turn humans into bird characters was difficult because you can try to make them realistic with feathers, [but that] can get expensive and time intensive, so we decided to use fabrics that mirrored that same texture. It was hard to manipulate the fabrics into shapes that copied the shapes of the real life birds.”

All the costumes seen onstage are the product of many hours of work put in by the costume department of Broken Box. Selena and Allison go through a specific process for each show in order to ensure that the costume they design is true to the character and fits the overall feel of the show.

“One group of costumes that I loved were those of Priscilla, Debbie, and Lucy, a clique of popular girls in “Spy School,” Allison said. “They were all in a matching uniform of skirts, cardigans, and hair bows. Even though it was a simple costume, it really helped to transform the actresses into their characters. It was nice to be able to add another layer to the characters.”

The first step is to read through the script, picking up on any clues the playwright wrote regarding characters’ appearances. Then, Selena and Allison proceed to search the storage closet, pulling clothing they think may work well. For any pieces they do not already have, part of the costume department’s job is to either ask actors to bring clothes from home, or shop online or in stores on their own time.

“We get a sense of who the characters are by how the actors are reading them,” Selena said. “Through their personalities, how old they are and just different aspects of their life we decide what we want them to wear… We didn’t [have to] make anything this year, everything was bought from second-hand stores or used from the costume closet, but I was really proud of the entirety of Spy School. Because it was set in a different time period it was [fun] to shop for and figure out the personalities of each character and translate that into a costume.”

Then, Selena and Allison integrate their materials and research into a representative costume that contributes to the play.

“For each character, we design a costume that we think would help personify and make real the character as well as add to the story and theme line,” Allison said. “We make sure [each character] is believable and make the play more believable for the audience.”