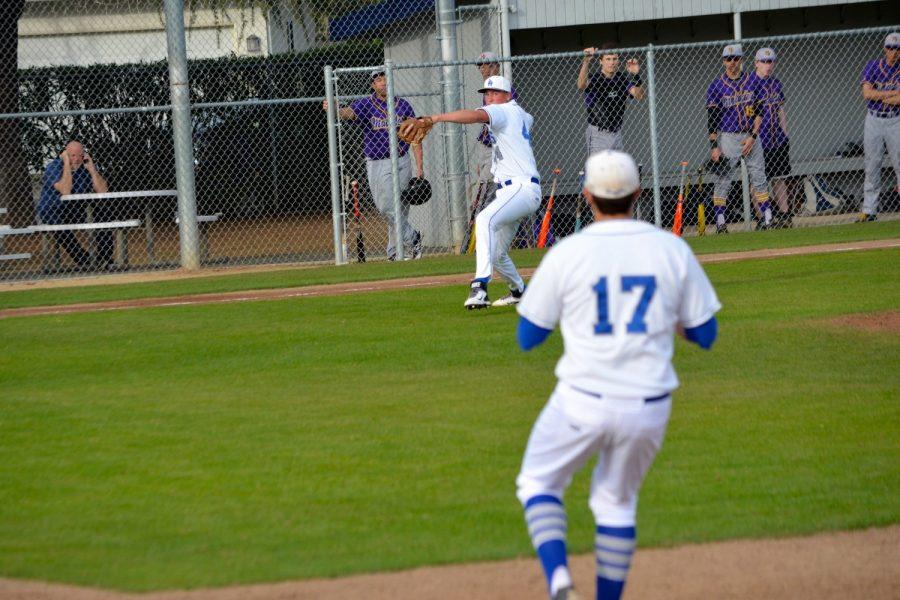 Sophomore Alex Reelfs throws to first. The baseball team is over .500 and looking to make a run in CCS. Photo by Kunal Pandit.

Courage. Pride. Poise. These three words are the focal points of emphasis for the varsity baseball team this year. Just past the halfway point of the regular season, the Eagles have a 12-9 overall record, which includes their 6-4 record in league. Sitting in third place, the goal for the remainder of the season is to reach CCS, but it won’t come without extra effort, something senior Adam Spielman clearly understands.

“Our goal for this season is to make CCS,” Adam said. “But not just make CCS, we want to make a good run while we are there and see what happens. [To do that] we need to focus more on keeping the ball on the ground and going gap-to-gap to be more successful on offense.”

One thing the team has going for its is experience. The team is filled with senior leaders from top to bottom, such as Adam Spielman, Trevor Rodgers, Paul Myers and Brennan Myers. Senior Nate Spencley, who also plays a leadership role, emphasized that equality and selflessness is vital to the team.
“It is important to not distinguish who is and isn’t a leader,” Nate said. “We are all out there together [as a team] trying to win.”

The Eagles have struggled to find consistency in their results, especially due to an offense that is either very much on or almost totally off. However, they’ve found a strong backbone in their pitching, led by Trevor and sophomore Alex Reelfs, who leads the De Anza League in wins and threw a complete game shutout to hand the then undefeated Palo Alto Vikings their first loss of the season on March 30. Through it all the Eagles have been able to crucially establish a winning mentality.

“It’s important to know how to win,” Nate said. “Once you experience winning, [it drives] you to experience that feeling over and over again. The win streak is a great thing to build on.”

Other than that, there is something extra special about this team. Maybe it’s the fact that they have completed the hardest defensive play in baseball, a triple play, twice. As for now, the team will keep its head down and try to continue driving its way up the league standings in hope that they will sit at the top at the end of the season.