Baseball in Japan: Respectful yet loud 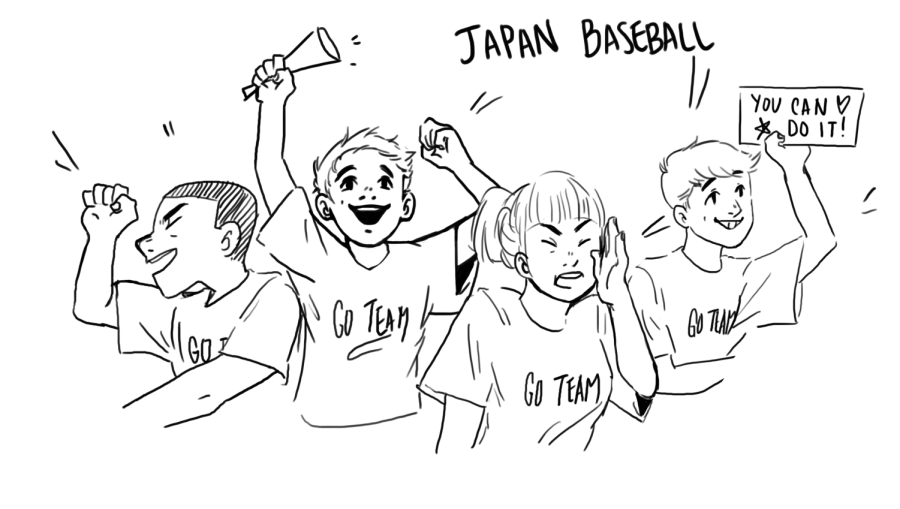 If you visit a Japanese ballpark, the first thing you’ll notice is the noise. It comes from the “Oendan” or thousand-member “cheering squads.” They’re like American cheerleaders, but with a much larger focus on creating noise — they yell into microphones, beat on drums and use horns to create excitement regardless of which team scores. And along with the oendan, fans of the batting team yell and cheer the entire game.

“Spurred on by energetic cheerleaders and the pounding rhythm of taiko drums, horns, whistles and other noisemakers, [a Japanese person] becomes a veritable wildman, yelling and screaming nonstop for nine solid innings,” Richard Whiting wrote in his book about Japanese baseball, “You Gotta Have Wa.”

Japanese baseball still carries basic rules from America, but that’s where the similarities end. The U.S.-born sport is Japan’s largest spectator sport, and it’s developed its own culture and norms. Japan’s Nippon Professional Baseball is far more boisterous than America’s MLB, yet has somehow maintained an unrivaled level of civility.

See, while Japan’s ballpark atmosphere is louder than America’s, it’s also more courteous: no one fights over foul balls, there’s no booing, there’s no brawling.

“They’re very respectful,” Oakland A’s first baseman Dan Johnson told The San Jose Mercury News. “…When their players do something bad, they’re not getting on them. All they do is stay positive and cheer. I didn’t even hear them yelling at the umpires.”

“The fans of the team in the field maintained a respectful hush, interrupted only by an exuberant wave of applause after each out,” Ingrid Williams wrote for the New York Times. “Questionable calls were never booed. No jeers rang out when an error was made.”

It’s not a lack of love for the sport or a lack of competition that creates this atmosphere  — Japan’s customs for respect and politeness dictate spectators’ and players’ actions. To Williams, “These fans radiated only love for their teams.”

But along with social norm, competition seems muted in Nippon Professional Baseball partially because rules only allow for 12 innings, creating many ties. Once 12 innings hit, Williams said, “Everyone packed up their paraphernalia and quietly shuffled out out of the stadium. Game over.”

Japan’s cultural focus on “wa,” or team harmony, has also played an influence on players’ experiences — most exemplified in their salary. In America, sports players are viewed as celebrities. The average major league player has an annual salary of 4 million dollars a year. Compare that to the average Japanese major league player, whose average salary is $29,294 a year. Their salaries, because of custom, are rarely negotiated.

And the focus on team harmony trickles down into gameplay. Sacrifice bunts, which put batters out but allow base runners to advance, are glorified. Teams never argue against each other. Violations of any rules are shunned.

Further, Japanese baseball allows people respite from a culture of quiet politeness. Even though — and perhaps because — Japanese customs tend toward respect, baseball games become a time and place for loud yelling. Along with the oendan, each baseball team has their own “fight song” sung by the audience to foster excitement in the crowd and players.

Japan’s culture has diffused into its baseball over the decades. Its differences from American baseball abound — stands sell sushi, grilled eel and rice balls, and spectators often wear traditional Japanese dress for a big game. But most importantly, Japan’s values of respect and “wa” have transformed America’s rivalrous sport into a unique blend of deafening excitement and hushed respect.