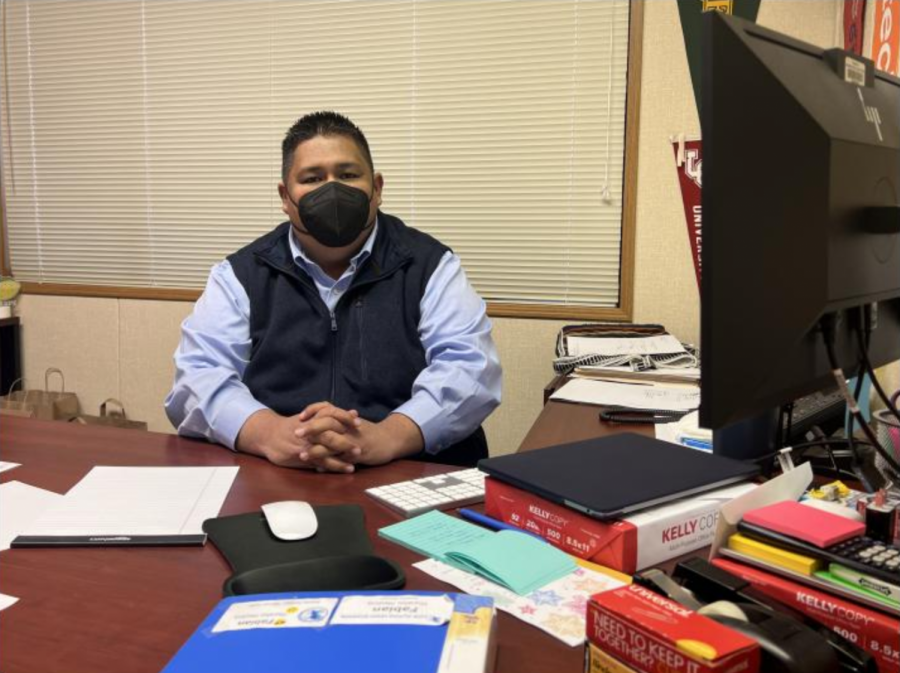 Assistant Principal Fabian Medina-Morales sits at his office desk. New to LAHS, Morales has brought his background in counseling to his new role as an administrator, earning the friendship of colleagues and students alike.

New to Los Altos High School this year, Assistant Principal Fabian Medina-Morales is all about family. The students at the school are his family, his old students at San Mateo High are his family and of course, the people he eats nearly every meal with at home at his dining table in Gilroy are his family.

That’s right, he still lives with his mom, his dad and his two sisters. And his mom still packs his lunch.

She cooks all his meals, actually. Over-easy eggs, pork chops, white toast and hash browns for breakfast. Medium-rare steak, a baked sweet potato and a salad for dinner. And an easily-microwavable bed of rice, vegetables and chicken for lunch — all prepared with love.

As delicious as it sounds, you’d think a person who leaves for work at 6:30 everyday would be able to pack a simple paper-bag lunch. But the real reason his mom still cooks his food isn’t that he can’t cook.

Morales still lives at home with his mom, saving money on housing and using it instead for his sisters’ tuition. To thank him for this sacrifice, his mom makes his food.

“My mom — being a really nice Mexican mom, right? — was like, ‘Well my son’s giving up his independence to help his sister, the least I could do is help him with making sure he has something to eat every day.’” He explained.

After breakfast, Morales uses the 45-minute commute from his Gilroy driveway to the high school parking lot to transition from his at-home son character to on-campus father figure. He starts the drive with 20 minutes of news radio, usually NPR or a podcast. At home, when he’s watching TV, it’s MSNBC, Comedy Central and occasionally Fox News because it keeps him balanced “to hear what the other side says.”

Twenty minutes into the drive, and he puts on his pumped-up classic rock playlist, full of oldies but goodies like the Rolling Stones and the Beatles. By the last few miles, he’s ready to pull onto campus and face his students with a smile.

Romeo Bienvenido Villanueva, a student at LAHS, is the Co-President of the Latino Student Union. Mr. Morales has taken interest in the club, lending his support as an advisor and by facilitating club elections.

“In general, whenever I see him around campus he always gives me a friendly wave and hello,” Romeo said. “I think he’s a great addition to the campus community.”

His undeniable charisma and compassion have left a mark on his colleagues, including fellow Assistant Principal Suzanne Woolfolk. They worked together for more than 13 years at San Mateo High School, and she knew he’d be a perfect fit at LAHS.

“I knew that he’s always going to have a line out the door of students that want to talk to him about life, or about classes,” she said. “In particular, AVID students, or students that need help. He almost [takes] a parent role in helping toward college or toward just finding a job.”

Morales arrived at the school as an administration newbie with multiple  degrees from local universities. He was the first in his family to go to college. Now, as an educator and counselor, he aims to guide students into realizing their own goals.

Morales relates this philosophy to his own background as a first generation college student. He’s found that teacher support played an important role in giving him the resources and skills necessary to work self-sufficiently. That support is the kind he wants to pass down to students who are still developing their own definitions of success.

“If I can be a person that can help a student through that and help them get to that level, then I’ve done my work,” Morales said.