ASB’s Sumo game is cultural appropriation at its finest 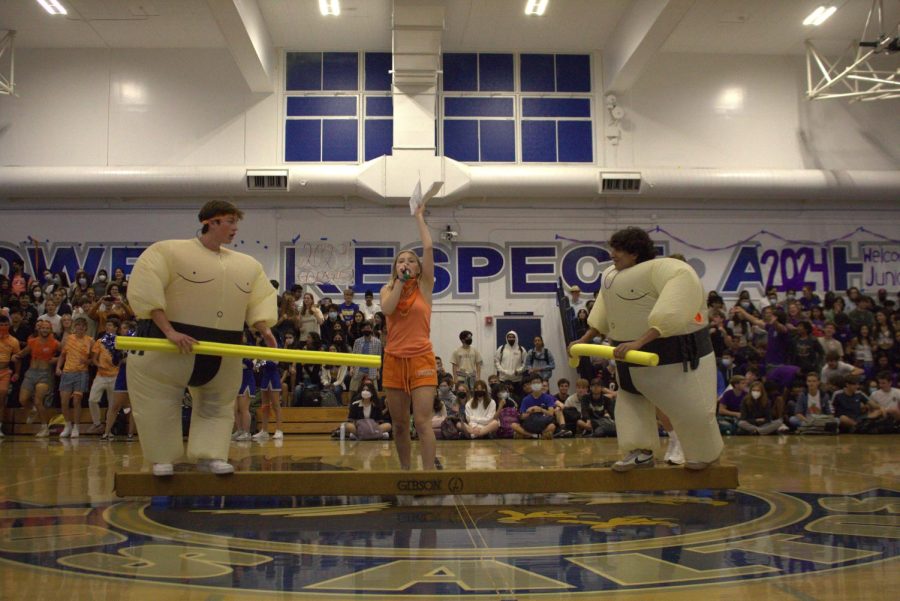 Students are participating in a game planned by ASB during the back-to-school rally. ASB introduced this game as "sumo" and it is being played with inflatable sumo suits, pool noodles and a balance beam.

Sumo has deep cultural history and significance and is said to have originated thousands of years ago as a form of imperial entertainment. The sport has very clear rules which involve forcing the opponent out of a ring using various hand-to-hand techniques.

I was sitting on the bleachers during the back-to-school rally as I heard the announcement for the next game — sumo wrestling. I continued to watch as teenagers in inflatable suits holding pool noodles brought out a balance beam and proceeded to try to knock each other off of it, all under the pretense of a traditional sport. By using the name “sumo,” Associated Student Body connected the spirit rally activity to Japan’s thousands of years worth of cultural history.

I figured that a lot of conversation around it would be an overreaction, but I looked into more small instances of cultural appropriation and realized it needs to be brought into discussion.

If Los Altos High School’s ASB just used the suits, I probably wouldn’t have thought about it twice. Maybe that was the only thing they had access to or were able to use. However, the problem was that they announced the game as “sumo,” Japan’s national sport.

Microaggressions like this boil down to a bigger societal issue of normalized cultural insensitivity. Incorporating elements of a community’s culture into events as comedy can come off as harmful, especially on minorities. It leads to failure to acknowledge cultural aspects as legitimate pieces of history, instead turning them into comedic effects.

“[Cultural appropriation has] been too normalized in school events, like ‘Hawaiian dress-up themed days,” ASB President senior Tara said. “That’s messed up — you shouldn’t be turning someone’s culture into a game or a spirit day.”

Sure, this one instance alone wasn’t so bad that I couldn’t sleep at night, but every microaggression snowballs into a significant part of modern society’s problem with cultural insensitivity. Subtle comments allow cultural appropriation to be normal, and can build up into harmful stereotypes that people hold of others.

“Of course when you think about all of the games, we tried our best to think about [cultural appropriation],” Tara said. “But honestly, this was a mistake on ASB’s end of not thinking about how this is and could be culturally insensitive.”

Any cultural insensitivity on ASB’s part was definitely unintentional, and the amount of obvious microaggressions I’ve seen like this has also severely declined over the past few years. The fact that ASB recognizes their mistake already makes me hopeful.

I don’t think ASB should be labeled poorly or “canceled” just for this. The fact that they’re willing to listen to me and consider their actions is very respectable. Bringing cultural appropriation into conversation should be on our agenda and I look forward to seeing more progress in the future.