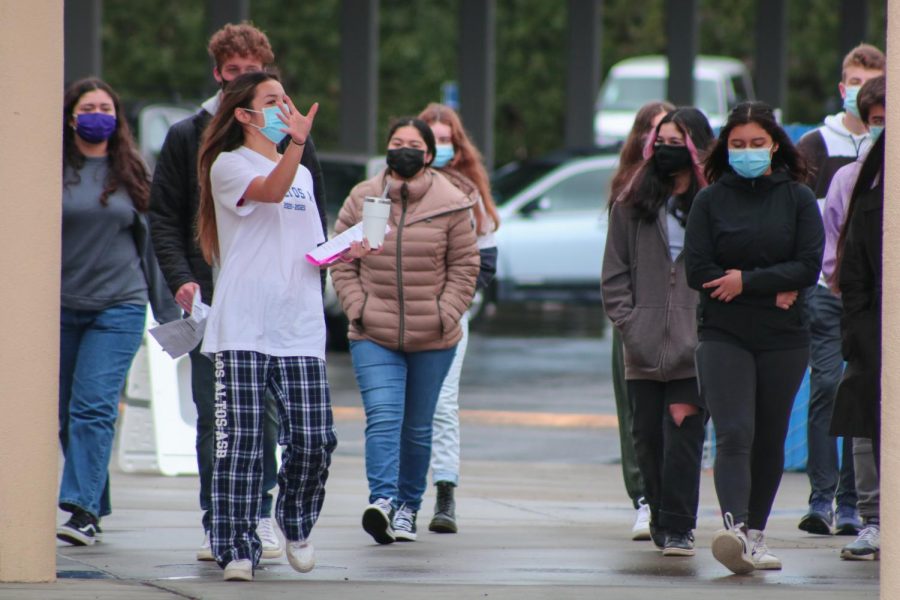 Jumpstart mentors led small groups of eight to 14 freshmen through their first official on-campus experience during Wednesday’s orientation-style event, hosted by ASB in anticipation of students’ regulated return to campus after Spring Break.

As the freshmen arrived on campus, lively music greeted them while Jumpstart mentors were spread out around the quad for freshmen to find their designated small groups, organized alphabetically. The mentors — Associated Student Body (ASB) and Student Community Leaders (SCL) student volunteers — led small groups of eight to 14 freshmen through their first official on-campus experience during Wednesday’s orientation-style event, hosted by ASB in anticipation of students’ regulated return to campus after Spring Break.

“The main goal that we were able to accomplish [with this event] was getting the freshman and students in general accustomed with being back on campus and remembering anything about student life they may have forgotten,” ASB Vice President junior Aida Yezalaleul said. “So when we do return to in-person school, the students aren’t so unfamiliar.”

Almost 300 freshmen chose to participate, with 35 upperclassman volunteers as their small group mentors. Split up into three sessions students got a more personalized experience to ask questions and familiarize themselves with the school community.

“I decided to come today so that I could meet new people and hear new things about the school,” freshman Sam Stein said. “It was really great to see people together talking and introducing themselves. I’m just excited to get to walk around somewhere that’s not my house, but if there are going to be school wide events next year, I’m most excited for that.”

The seven groups began their sessions with introductions. By playing ice breakers such as two truths and a lie, jumpstart mentors aimed to build connections and establish themselves as resources for their mentees.

Following introductions, mentors took the freshmen on a tour of the campus. They pointed out each classroom wing and building, giving the freshman a feel of the opportunities available on campus, whether that be unique elective classes or lunch spike ball competitions on the back field.

Besides social distancing and wearing masks at all times, there were other unfamiliar practices to this annual event, such as the use of a QR code to sign in and take a preemptive COVID-19 check-in survey.

While mentors hope future orientations are free of COVID guidelines, the success and efficiency of using a QR code was something they took note of for future implementation.

“I feel the freshman orientation was a success considering it was an optional event and we had a great turnout,” said Aida. “They all seemed to feel more comfortable on campus afterwards, and we look forward to meeting the rest of the class of 2024.”