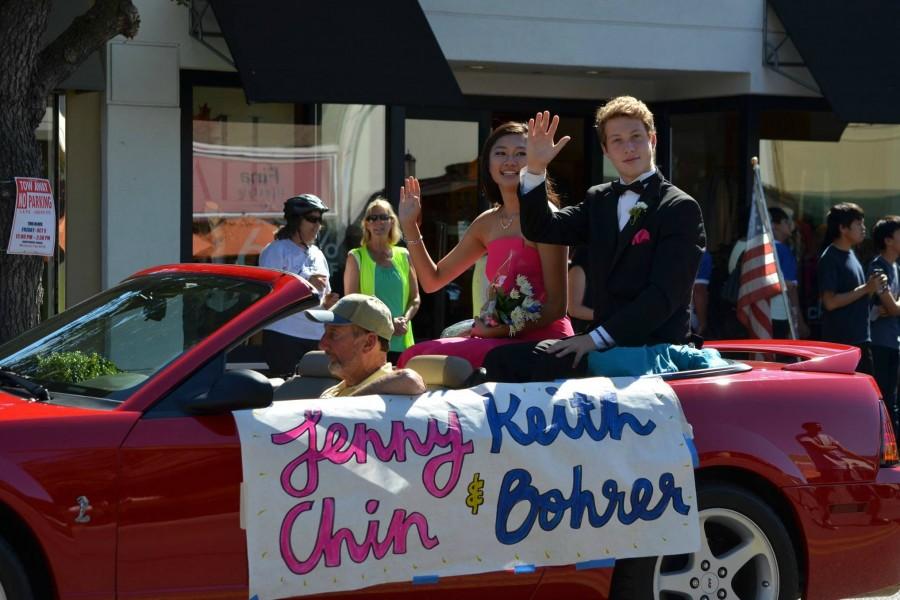 On Saturday, October 10, ASB hosted the annual homecoming dance in the large gym. This year, ASB chose the homecoming theme to be “California,” featuring several activities related to the state’s history and culture. Prior to the dance, ASB organized and ran homecoming week, which involved brunch activities, dress-up days, a parade and an assembly to arouse school spirit.

“The dress-up days were really easy because we thought of a bunch of different things that encompassed California that you could wear,” ASB decorations committee leader senior Audrey Small said. “It was particularly easy for California because there are so many sports teams.”

Different clubs, sports teams and class councils could also apply to spend a weekend decorating a hallway. The decorations were left up throughout homecoming week in order to encourage class spirit.

The homecoming parade took place the day before the dance on Friday, October 9. Over 20 clubs, sports teams and other student organizations walked this year. Students, parents and residents of Los Altos gathered on Main Street in Downtown Los Altos to watch the festivities.

“We bring the entire community together and we really have a great time,” ASB parade committee leader junior Douglas Curtis said. “We need to make sure that everyone has a fun time downtown on their half day and [has] homecoming spirit.”

Other features of the parade included class floats that all of the class councils built and the homecoming court couples riding in vintage cars.

“The major thing [was] the couples,” Douglas said. “The homecoming couples are obviously a huge part. [We were] going to kind of help celebrate them and all of their accomplishments. But moreover, we really wanted to celebrate the clubs and the diversity we have among the school.”

ASB puts significant time and consideration into choosing the theme because it shapes the rest of the event.

“We start the process really early, and we make a master list of all the possible [theme ideas],” Audrey said. “We just brainstorm all of them and then talk about whether we think [they are] reasonable or not. We really try to make it as big and dynamic as possible.”

During class time, ASB worked on decorations such as signs, posters and cutouts for the dance relating to the theme they chose. Publicizing and setting up for the dance is left to the junior class. This is in preparation for prom so that juniors have some experience putting on a large event and also because homecoming helps the juniors raise funds in order to put down a payment for prom.

While homecoming is meant to embrace all students, multiple ASB members believe that there are some issues regarding the heteronormativity of homecoming court, caused by referring to members of the court as “couples,” rather than “pairs” or “teams.”

“We’re definitely working on it,” ASB member senior Julia Khan said. “I do think that the heteronormativity of homecoming court is a major problem. But I think if you look at the court as a whole, it is a group of dedicated individuals who have brought something to their community that has made it a better place.”

There have been many discussions within ASB about changes that could be made to make homecoming more inclusive of all types of students.

“There [are] lots of strong traditions that exist,” ASB advisor Suzanne Woolfolk said. “That being said, there can be thoughtful changes made.”