Are you worth more than a cucumber? 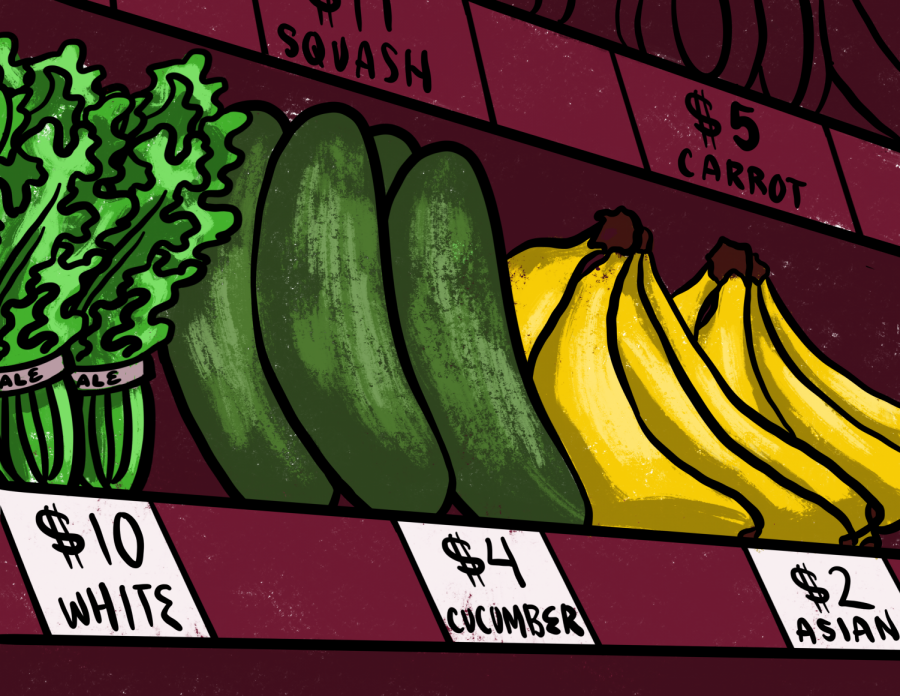 A produce stand displays kale, cucumbers and bananas for varying prices. According to a white teenage boy on TikTok, $2 is the monetary value of an Asian, below that of your average cucumber.

I was scrolling through TikTok, as one does, when I came across a delightful little nugget: A white, teenage boy staring at the camera (for a whole minute) while text ran across the screen. He had, even more delightfully, taken it upon himself to … judge each race’s monetary value.

I presume he was referring to attractiveness, as boys with middle parts usually do. White people were, unsurprisingly, on top, valued at $10 in the boy’s mind. What did surprise me was that cucumbers had made the list. And, at $4, the fruit (yes, it’s a fruit) was not last. No, last on the list were Asians, priced at a whopping $2.

Being Asian American myself, I wondered why I cost less than a cucumber. I won’t lie — I laughed (it’s kind of funny in a self-deprecating way). But it’s videos with that kind of message that reveal the problematic way beauty is perceived in America.

For some context, I was born in Redwood City, Calif. I tell people Los Altos because we moved there a couple of months later, so it basically counts. My parents are both Chinese, but I am a Californian, through and through. I say “yeah no” when I mean “no” and “no yeah” when I mean “yeah.” I definitely wouldn’t be caught dead saying “Cali.” And I would like to think I understand American culture, having lived here my whole life.

But there is still something intrinsically American that I can neither escape nor become, and that is the Western beauty standard. White prettiness, if you will.

I see it everywhere, even if I don’t really notice, perhaps most prevalently in the media. I see it in the way any thin, pretty, white girl with just a modicum of physical coordination can become famous on TikTok. I see it in the way only white women were allowed to enter the Miss America Pageant up until 1940.

I see it in Noah Flynn — the epitome of the white bad boy with abs of steel and emotionally abusive tendencies. Of course, I’m not saying I want a Noah Flynn look-alike to fall madly in love with me. But it does beg the question — would he? Would Cucumber Boy find me attractive? And if he didn’t, would it be because of my personality, or because I don’t fit in with his Western ideals? Because I don’t conform to the blond-hair, blue-eyed Barbie that everyone else is compared to?

Logically, I know I don’t have to conform to such toxic standards. But when the rest of the world is telling you this — when everywhere you look, the “beautiful” models and movie stars are white — what else are you supposed to think? It’s easy to say that beauty comes from within, that if you’re kind and compassionate, you’re good to go, but it’s harder to truly believe that.

I have nothing against skinny, pretty, white girls. The fault does not lie with them, nor does it with me. Centuries of white people believing they are superior in every aspect, including beauty, has probably led to this problematic belief that still permeates modern-day society.

It’s the subconscious signals that affect us, making me think Noah Flynn is the ideal and make me resigned to the fact that the Noah Flynns could never like me. Already, women are held to impossible standards — this is just one more that girls like me could never live up to (seriously, I don’t think I could pull off freckles).

But do we have to? Do we have to believe that we are somehow lesser because we are not white? I think not. And already, people around the world are fighting to change the way we have been programmed to perceive beauty. Take the About Face organization, which hosts workshops and programs to teach girls how to reverse internalized beauty ideals.

But the most important thing to realize is that while this may seem like an insurmountable challenge, the truth is, you don’t need to change how the world thinks of you to change how you think of yourself.

There’s nothing wrong with wanting to be beautiful or attractive. But beauty is subjective and means more than what society tells you it does. It can mean a lot more than how white your skin is, how dainty your nose looks or if you can pull off Lululemon leggings.

So stop wishing you were a cucumber just because some pubescent boy on TikTok said so. It’s a fruit. Come on.