April Fools Day is not a joke 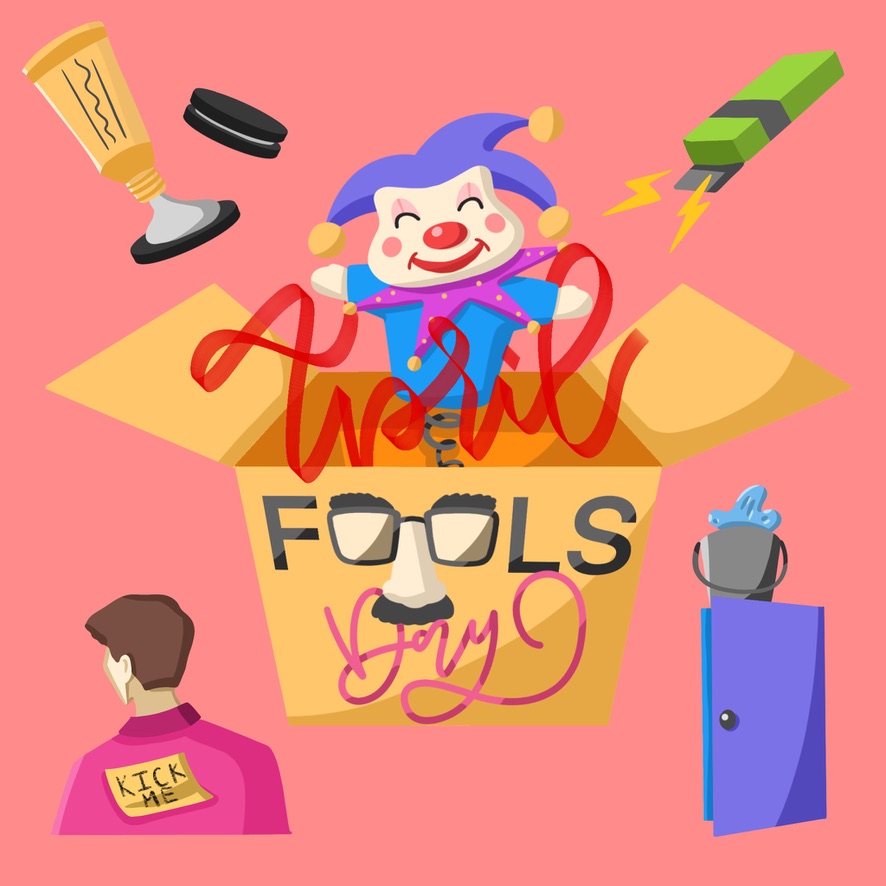 Many people know April Fools as the day of pranks. Although California is currently under shelter-in-place, this didn’t stop these Los Altos students from carrying on the tradition.

By Marie Godderis and Kaavya Butaney

Annually celebrated on April 1, many people know April Fools as the day of pranks. There are a few possible origins of April Fools. Many believe it originated when France changed calendars, but a few people stayed with the old calendar, celebrating New Year’s at the wrong time. This led to many playing pranks and hoaxes on them to make fun of them. Another possible origin of April Fools is the ancient Roman festival called Hilaria, which means joyful in Latin, where many citizens dressed up in disguises and mocked one another.

Recently, people and companies have often gone to great lengths to play pranks. For example, in 1957, the BBC broadcasted people “harvesting” noodles in Switzerland, and in 1996, Taco Bell announced a plan to buy the Liberty Bell and rename it the Taco Liberty Bell. The Talon also played a prank on its own followers, “rick-rolling” them with a fake April Fools hyperlink that gained 200 clicks.

Although California is currently under a shelter-in-place, this didn’t stop these Los Altos students from carrying on the tradition.

The Talon interviewed a few students on their views of April Fools.

Note: These interviews have been edited and condensed.

Describe your prank for April Fools.

I edited one of The Talon’s coronavirus updates to say that coronavirus was cured and that school would start again.

Why do you prank people?

I prank people because it’s fun for me, but also because it’s good to lighten the mood. When executed like this, everyone can send it to their friends and be sorta “in” on the prank, which is always a good feeling.

Did people fall for your prank?

Yeah, some people were confused, but almost everyone realized pretty quickly. I was going for a double-take moment rather than actually tricking people because it’s more of a sensitive topic. I was a little worried about posting it, but it went over fine.

I just signed up a bunch of my family members for the Connecticut Ferret Association, and it would just send them emails about how to take care of their ferrets. They knew it was me really quickly. My sister was like, “Carly, are you sending me emails about a Ferret Association?” They weren’t really mad; they thought it was kind of funny.

Describe your prank for April Fools:

My sister was sitting in her room working on her homework, and I went in there and told her, “Dad needs to fix your glasses because one of the screws is a little undone.” Then I took eyeliner and put it on the rims of the glasses where they touch your face. Later she went out for a run with glasses marks on her face. She had no idea until when she came home and my mom asked her what was on her face, and we all laughed.

How has the shelter-in-place affected April Fools?

I feel like April Fools used to be a lot bigger when we were little. I think the reason why it worked so well this year is because it’s so out of the blue. No one thinks it’s April Fools because all of our days are jumbled around. Not many people were thinking of pranks, and my sister was super caught off guard.

What does April Fools mean to you?

April Fools is a day where you don’t have to be serious. In France, it’s called Poisson D’avril, which translates to “April fish,” and it’s celebrated similarly. One tradition that many children learn is to cut out colorful paper fish and to stick them on your friends and parents’ backs secretly. There are many theories on how Poisson D’avril started, and one is that it used to coincide with the last day of Lent. Since fish is the only meat you can eat, people tricked one another with fake fish.

How has the shelter-in-place affected April Fools?

Even though this April Fools wasn’t as crazy as it usually is, I think it’s important to continue to do traditions close to your heart. My dad is from France and my family used to all make our paper fish and stick them on each other throughout the day. My sister and I used to do it a lot especially with my dad, and my French teacher encouraged our class on Google Classroom to do it. With everything that is going on in the world right now, I think it’s very important to make others smile and stay hopeful by finding safe ways to have fun.

How did being in shelter-in-place affect your pranking on April Fools this year?

I had a lot more time to think about what I wanted to do. I’m with my family members all day, so that’s a pretty good pranking environment.

Did anyone play pranks on you this year? What did they do?

My little sisters did. One of them made jello and said it was juice and had people try and pour some. Another drew spiders and put them all over the house.