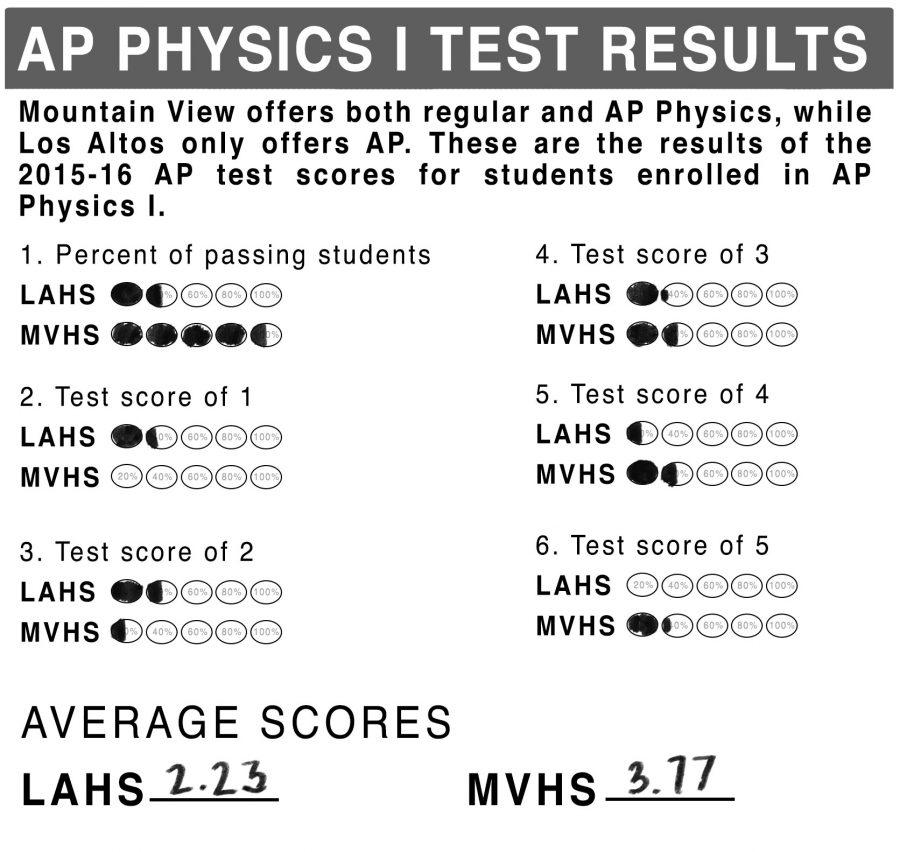 These test scores do not represent the complexities of the situation as the demographics of the students in the classes vary in skill and preparation levels due to the nature of the curriculum. There are other factors at play, meaning this data does not support the claim that one school has superior teaching staff or curriculum. Graphic by Anne Schill.

By Savita Govind and Anisha Desai

After receiving this spring’s AP scores, the district board discussed LAHS’ AP Physics I test results in comparison to MVHS’ results at a meeting on September 6. LAHS’ pass rate hit a record low at 38 percent for students enrolled in AP Physics I, while MVHS’ pass rate was 92 percent. The school board is analyzing differences between the schools’ physics programs and potential changes for LAHS.

“The choices were to keep teaching the regular physics class that we’ve always taught or teach a slightly easier class that students get AP credit for,” physics teacher Adam Randall said. “At the same time, the school is always looking to engage more students in AP classes.”

Along with a low pass rate, LAHS students enrolled in AP Physics I achieved zero 5s, while MVHS achieved 15 5s. The district established classes at MVHS and LAHS to be completely aligned, but many differences remain.

“We are trying very hard to have a uniform curriculum in the district, but our schools are unique,” Associate Superintendent Brigitte Sarraf said. “Sometimes one school has a certain pathway in mind and another school has a different pathway.”

The board debated the AP courses’ alignment with the AP test and the similarities and differences between the regular class and AP Physics I.

“Either it’s the curriculum or it’s the alignment with the AP test,” Sarraf said. “If that is the case, then I think our teachers’ conclusion that the content of the regular physics class is almost identical to the AP Physics I class may have been wrong. But it is too early to say that with certainty.”

“Students say if they don’t like to work as hard as an AP class requires them to do, they have nothing to drop back to,” Sarraf said.

The board and administration are uncertain what changes will be made next year because they do not want to move forward without more data. They will continue to discuss the issue in coming months.

“Normally we would take a lot more time to talk to all the constituents before we eliminate a class, such as physics,” Sarraf said. “On this one we rushed; why is not entirely clear… I suppose… we were led to believe that our regular physics curriculum covered virtually all the standards that the AP curriculum covers. We did not really think about the consequence of taking choice away from the students.”

Note from the editor

There have recently been concerns surrounding a graphic and accompanying news article about AP Physics I that was published in Issue 1 of The Talon. While the information presented in the graphic was correct, The Talon acknowledges that the article and caption did not previously provide sufficient context.

We would like to clarify that the statistics shown in the graphic do not mean that the AP Physics I classes at Los Altos are taught or designed any worse than the classes at Mountain View.

There are other factors to be taken into account — the demographics of the AP Physics I students at each school are different because the class offerings are different, so to directly compare the two and draw conclusions solely from the graphic would lead to misinterpretations.

The Talon understands the errors that were made, and we apologize for them.