AP and CST Scores Released for the School 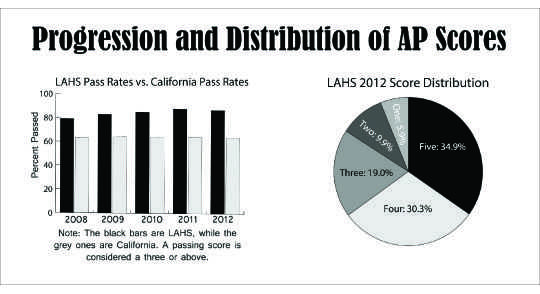 The AP exam scores from 2012, released on Sunday, July 1, show a five percent improvement from 2011 throughout the district. A total of 2,105 AP exams were taken by 1,133 students in the district. A score of three or higher on an AP exam is considered a passing grade, making the student eligible to use the course for college credit at some colleges. Eighty-six percent of the exams earned a score of three or higher.

Assistant Principal Galen Rosenberg said that in addition to the increase in scores, the school saw an increase in students enrolled in AP classes.

Students who took an AP exam for calculus tested with a pass rate of 86 percent. The pass rate for students taking an AP English exam was 88 percent. AP exams for history and government had a 84 percent pass rate. The percentages at which the district’s students passed in each subject were significantly higher than national averages.

“I think it’s great that as a public high school, we offer every science course that the college board has AP tests for,” Randall said. “I think that’s a real benefit for students at our school. All of the AP science teachers are really passionate about the sciences they teach.”

However, Randall said the actual exam is not the only value of taking an AP class.

“Scores are the last thing that I’m really interested in,” Randall said. “It’s communicating scientific literacy to students in high school at a college level that is pretty cool. I think I’m as proud of the two students who got a 1 as the 28 students who got a 5 – they all learned a significant amount.”

Randall said that the school’s success in AP classes was enabled by the district’s assistance.

“The district values our AP classes and supports us with the budget, the equipment and the resources to teach a lab based science class at a first-year college level,” Randall said.

The district also saw improvement in many subject areas of CST scores from 2012. The improvement follows an upward trend in scores seen in recent years. Rosenberg said that the improvement is a result of schoolwide effort.

“For the last several years, we’ve been collaborating schoolwide and in departments to align what we do in the classroom with state standards, but also – I think more importantly – with what we think is the best practice for students,” Rosenberg said. “The consistency of the upward trend suggests that all the collective work we’ve been doing has been helping.”

District superintendent Barry Groves said that ninth and 11th grade scores showed improvement in every subject, while 10th grade students improved the scores in every subject except Algebra II.

“This improvement in student achievement is linked to our teachers’ efforts to align instruction and continually review data to evaluate their effectiveness,” Assistant Principal Perla Pasallo said in a press release from the district.
In future years, there will be changes in California’s standardized testing process.

“CST and state standards are going to change in two years to what are called Common Core Standards and at this point we don’t know for sure what the testing is going to be like,” Rosenberg said. “The common core standards are expected to be higher than the California State Standards.”

While the Common Core Standards will not be implemented until two years from now, there are some changes in requirements that are already expected to come with the new standards.

“I expect [Common Core Standards] will include less emphasis on factual recall… and more emphasis on synthesis, interpretation and analysis in all subject areas,” Rosenberg said.