After eight years in the military, instructional assistant Andrew Rathjen has found his calling in the classrooms of Los Altos. 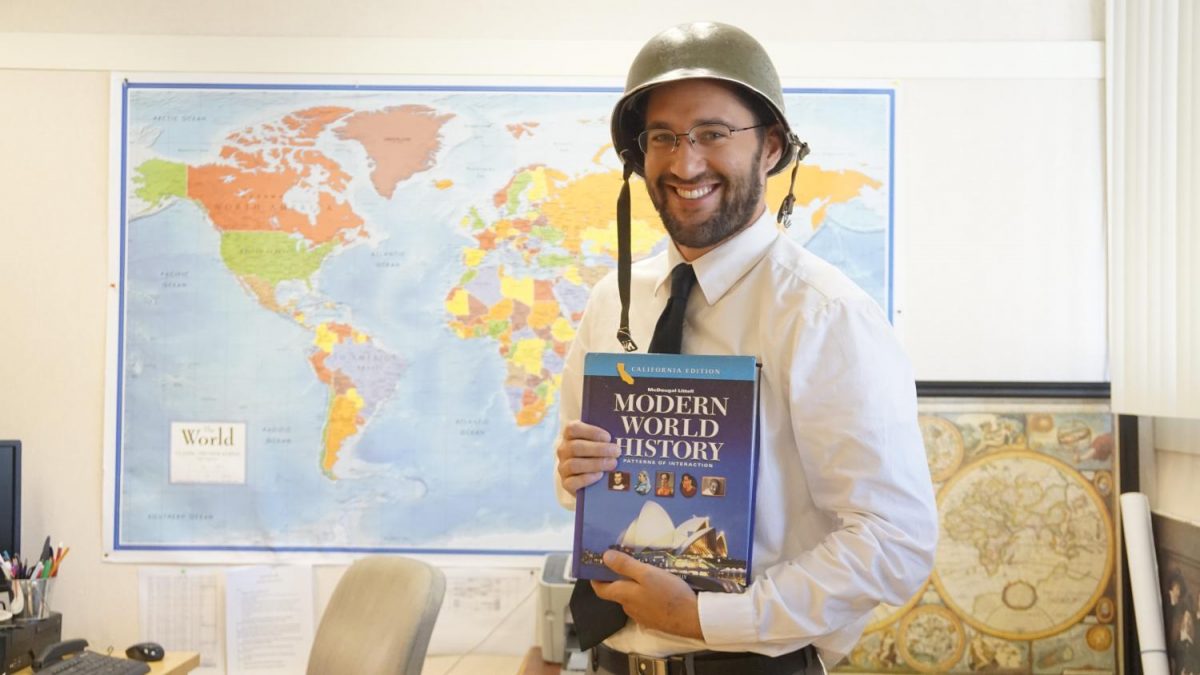 Stepping into the Beale Air Force Base, Andrew Rathjen navigates through multiple security checkpoints to enter the debrief room. He receives a mission set, and he delves into the events that occurred in the past 24 hours.

Once finished, he enters a new room. Here, following the illumination of hundreds of computers, he reaches his seat. He’s on mission, watching a scene through the camera of a U2 drone.

On the screen, Rathjen sees three men enter in ratty T-shirts and sandals. They share the weight of one $60 AK-47. He tells his colleagues what he sees on the screen, and they leap into action.

He accepts the strike, and, further down the line, the commander signs off. A few minutes later, the whistle of a plummeting missile preludes an explosion.

The mission bears a striking resemblance to one Rathjen completed several years prior; three men wearing the same scraps in the same location, killed with the same method. The only difference was the type of drone.

This was the moment that broke him and sent him back home to Los Altos, his alma mater, where he is currently an Instructional Assistant.

Rathjen graduated from Los Altos in 2005, and later attended the University of Colorado. After obtaining a bachelor’s degree, he returned to Los Altos where he taught art to children. But eventually, Rathjen decided to join the military.

Rathjen started his military career at two different Air Force bases in Texas for his basic and technical training. He was then relocated to the Osan Air Force Base in South Korea to become a geospatial intelligence analyst, a title he calls a “fancy term for ‘I Spy.’” Thirteen months later, Rathjen moved back to Northern California and finished his career at the Beale Air Force Base.

At Beale, Rathjen received a promotion and found himself traveling across the United States to help facilitate missions by working with drones. He specialized in ground moving target indication (GMTI), where he tracked important targets on the ground. Even after reaching the highest military clearance the government can give, he began to notice ethical issues within the military and government — issues that grew on his conscience.

He saw the government excessively spending money: $25 million on a gas station in Afghanistan that should have cost $200,000 to $400,000. He saw large amounts of money just disappear into thin air: the Pentagon could not account for $3.2 trillion dollars.

He saw casualty reports being filled out sloppily; one of the many ways tasks and missions left those involved with inadequate accountability.  Rathjen became disillusioned with the professional, detail-oriented reputation of the military that had drawn him to it in the first place.

“I just kind of got burnt out,” Rathjen said. “Especially seeing the hypocrisy of what we preach and carry out… I wanted to serve, and for everything they teach you and tell you that you’re fighting for — to see that that’s not really the cause, that it’s actually just to spend money, and our money: it kind of wrecks you.”

Back in Los Altos, Rathjen volunteered at Los Altos’ Camp Diversity, a four-day program where select Los Altos students participate together in outdoor activities. The program was organized by now-retired Los Altos Assistant Principal Cristy Dawson, who is Rathjen’s mother.

Through talking to students at the camp, he realized the struggles faced by high schoolers and how he could be involved in finding solutions. He saw students embrace their mistakes, and he loved being able to help them find their way.

“[The camp] shows that there’s still humanity, that there’s still goodness in people,” Rathjen said. “You can measure and see these kids who have never been friends in school. Now they’re very good friends because of these experiences, and seeing that especially coming from the military gave me hope. And I really didn’t have hope. Once I got out I knew I needed to do something to give back and continue to help but I didn’t want to hurt any more people. So the best option was to try to help out kids.”

After the drone strike, Rathjen felt he could no longer accept the problems he saw as evident within the government. After eight years and seven wars serving in the military, he decided to quit his job and put military life behind him.

Rathjen is back at Los Altos, pursuing a career in teaching. Now, Rathjen is surrounded by white boards and rowdy students instead of confidential papers and surveillance screens. He serves as an instructional assistant working mostly with special education history classes.

“If I can get one kid that’s on that edge that’s going to end up being a dirtbag, if I can get them on the winning side to help us fix problems, that’s worth 10 years of my life,” Rathjen said. “Because that person then contributes, so if I can get two to three kids a year to just try a little bit more to realize they have that potential… I’m content.”

At first, he faced some difficulty with transitioning between two drastically different professions. Before, Rathjen was treated with authority and collaborated with well-educated professionals that dealt with life and death. Now, Rathjen works with lax teenagers who choose to “go with the flow” despite obvious concerns with social and academic performances.

But, he understands where his students are coming from. Being dyslexic himself, Rathjen has experienced similar challenges as his students, allowing for a more unique connection. Rathjen despised activities that included reading when he was in high school, but now refers to himself as a “news junky” and reads non-stop. He hopes to help students overcome challenges that come with their disabilities as he did with his own dyslexia.

Rathjen still suggests a military career to his students for the professional and learning experience, despite facing legitimate ethical dilemmas during his time in the Air Force. Both the discipline and the unforgiving nature of the military, to Rathjen, give a military career its value.

Now, Rathjen has a new purpose — to change the narrative by helping kids. Rathjen is looking to impact his students’ learning experience so that they leave class each day knowing more and being able to make the right decisions.

Rathjen found an alternate solution to saving his country in teaching, and he wants his students to know that grades don’t define their futures. There are always alternate solutions to the problems they will encounter.