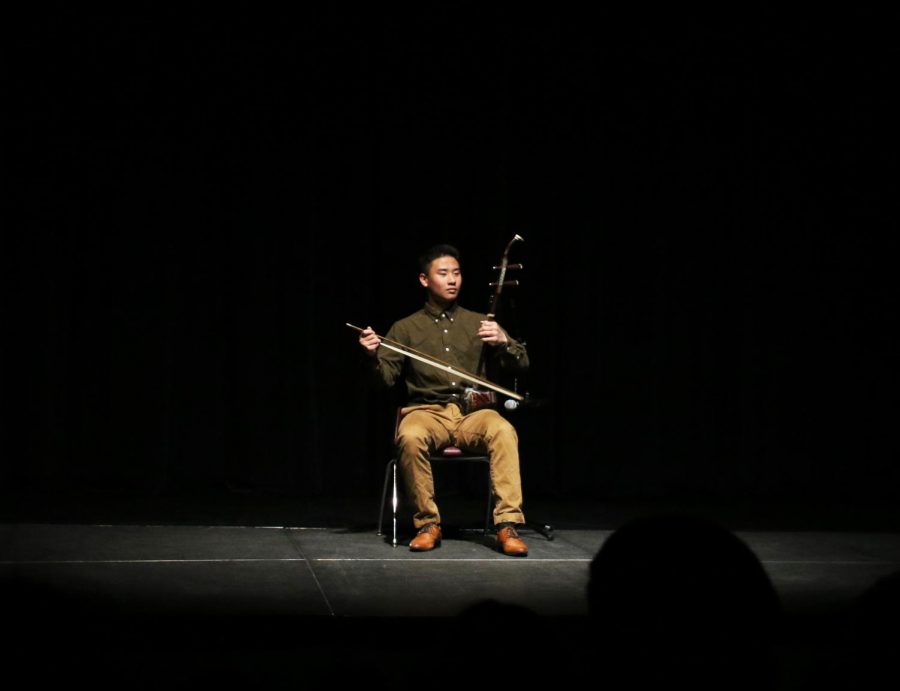 By Priya Dixit and Daphne Ih

The erhu, a two-stringed instrument named after the Mandarin word for “two” (“er”), is over a thousand years old. The instrument’s bow is attached between the strings on top of a snake-skin covered, hexagonal sound box that produces earthy, sonorous music. This is sophomore Anderson Wang’s specialty: through playing this traditional Chinese instrument, he pursues a form of music he enjoys while still preserving his culture.

Through the erhu, Anderson has grown closer to his heritage, and he’s also had the opportunity to show off his culture. He enjoys being able to share the versatility of the erhu and traditional music with audiences of differing knowledge of Chinese traditional music. As a result, when performing, he tries to find a balance between traditional Chinese music and Western pieces.

“I really focus on giving back to the community with erhu because I can play something that I enjoy and [also] share it with people,” Anderson said.

Although Anderson himself enjoys learning harder, lesser-known traditional music, he finds himself somewhat restricted when performing for more western audiences that may find the typical Chinese style hard to relate to.

“I still play traditional music, [but] performing at more local community events, it’s easier for people to understand Western music,” Anderson said. “When I perform at Chinese events, people know the music and the meaning behind it.”

For the school talent show, he was initially conflicted over what to play. However, in the end, Anderson chose to play a traditional piece titled “Sai Ma” — which translates to “horse racing” in English. More than anything, he wanted to properly showcase the versatility of the erhu and his pride in his culture.

“I [just] want people to know the [erhu as] more than just the Chinese instrument you hear people play in Chinatown,” Anderson said.

Now in his sixth year of playing, Anderson was first inspired to pick up the instrument after listening to a concert by the California Youth Chinese Symphony (CYCS) and other popular cinematic soundtracks from “Kung Fu Panda,” “Legend of Korra” and Avatar the TV show.

“I wanted to play the instrument — it wasn’t like my parents forced me or [that] I had to learn it,” Anderson said. “That did happen [with] piano, but when I picked up the erhu, I really [wanted] to play it because I liked the sound of it.”

As a member of the selective CYCS ambassador group, Anderson often performs with a smaller elite orchestra. True to their Asian culture, most of their concert repertoire consists of classic Chinese and Mongolian music as opposed to more contemporary Western pieces.

Anderson’s dedication to the erhu, his heritage and the symphony is apparent to his fellow musicians, such as Cupertino High School junior Cleo Chow. Cleo plays the zhongruan, a four-stringed instrument structurally similar to that of a guitar or banjo.

“From what I’ve observed, I think he really cares about his playing,” Cleo said. “I think he’s really serious about playing and it reflects in the music when he plays, and he takes on a more active role in the symphony.”

Mission San Jose High School junior Angelina Xu plays the guzheng, which is an instrument consisting of 21 strings stretched across the top of a wooden sound box, similar to a zither. She believes that this aspect of CYCS helped her and Anderson become closer to their heritage.

Outside of CYCS, Anderson plays at various public events and open mics. The erhu itself is a very versatile instrument with the potential to express a wide variety of emotions and tones, enabling the musician to mimic animal and ambient nature sounds.

“[There’s] history behind the music and stories behind the music,” Anderson said. “Playing that [music] and allowing other people to hear it also allows me to show and spread Chinese culture. Music is part of all cultures [and] it’s a reflection of [people’s] daily lives.”