An overview of the first presidential debate

We’ve summarized the main points of tonight’s presidential debate. Each of the main sections includes the key ideas covered as well as our writers’ commentary. Note that the commentary only reflects the opinions of individual writers, not The Talon as a whole. 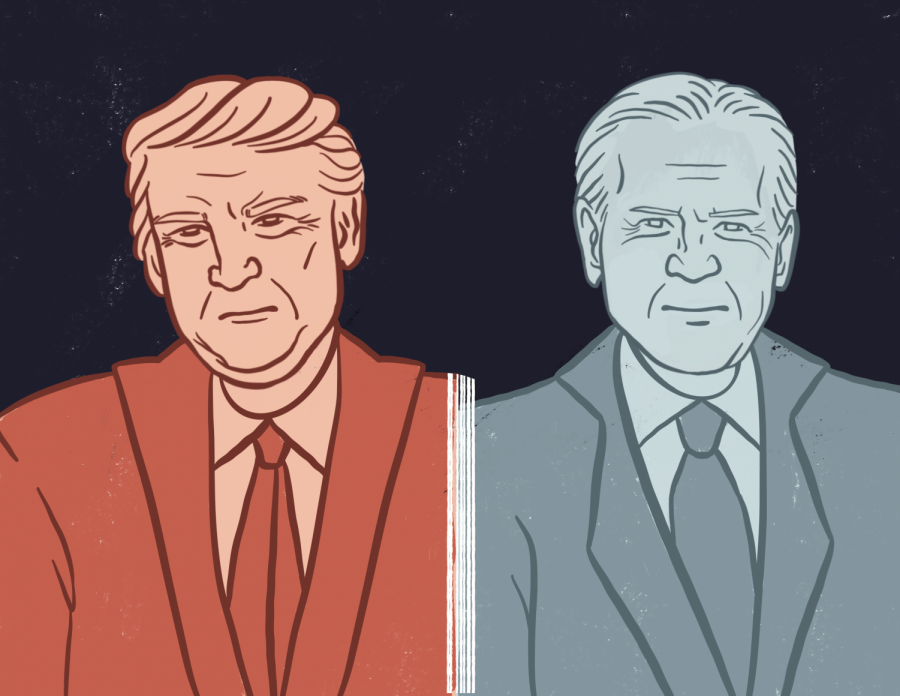 The Talon provided summary and commentary for the first presidential election today.

Trump and Biden started off by discussing whether the sitting president has the right to nominate a justice before the next president takes office. Trump argued that his right to do so extends through the entirety of his four years, and that he has control over the nomination. Biden countered, saying that the American people should have the right to choose who nominates the late Justice Ginsburg’s replacement. The discussion shifted to healthcare when Biden argued that a conservative-leaning SCOTUS would strip people of access by scrapping the Affordable Care Act.

Biden and Trump both argued their positions fairly calmly; in fact, based on the first minute or so of the debate, I was starting to expect a cordial, held-back night. It soon became clear that it wasn’t meant to be.

After their first few turns, the conversation quickly devolved into a spat about healthcare filled with frequent interruptions from President Trump. At one point, Trump brashly commented that moderator Chris Wallace was debating him instead of Biden when Wallace pointed out his lack of a comprehensive healthcare plan.

This portion of the debate concluded with Biden refusing to answer whether or not he would support increasing the size of the Supreme Court if elected. Not a great look.

Biden opened this section with strong criticism of Trump’s response to COVID-19. Trump retaliated, claiming his administration is weeks away from a vaccine and has taken all necessary action; he pointed to Biden’s handling of the swine flu in 2009 under the Obama administration, arguing that Biden would’ve done a worse job with the coronavirus. The conversation shifted to campaign rallies and Trump claimed he has had no negative impacts, while Biden asserted that Trump doesn’t care about his voters.

We got off to a good start with Trump managing to keep his mouth shut for two minutes, giving Biden time to actually comment on Trump’s complete lack of action on the coronavirus. Wallace brought up the way each candidate has organized their campaign rallies, and the policy debate quickly devolved into a rally-attendance measuring contest, since that’s what really matters right now.

Trump immediately latched onto Biden describing himself as “smart” to mention Biden forgetting which college he went to (which happened a mere 8 years ago). During the most important issue of the night, Trump made the outrageous and false claim that Biden golfs more than him. Another point of contention, apparently Biden’s masks are too large.

In the end, though, I’m glad to see Trump has expanded his vocabulary with a new catchphrase: “Chinese plague.” It’s good to see bigots can use thesauruses too.

Trump opened the discussion of the economy by advocating for a speedy reopening of businesses, including the quick reopening of schools. Biden argued that Trump’s plans only serve the wealthiest Americans, and instead showed support for what he called a more thoroughly planned approach that would maximize benefit for poorer Americans and small businesses. Trump then attacked Biden for his response to the 2008 recession and Biden countered by saying the Obama administration gave Trump an “excellent” economy and that Trump has “ruined” manufacturing and trade deals.

The economy was pitched as one of Trump’s biggest strengths before COVID-19 brought immense job loss and devastated the economy. Trump’s push to return to normalcy at the expense of lives rubs me the wrong way, and the emphasis he placed on the return of Big 10 football especially feels wrong coming from the president who has done little to nothing to prevent over 200,000 deaths from COVID-19.

In terms of the economy as a whole, the facts clearly favor Biden. As Wallace said, the Obama administration inherited an economy in shambles and did a full 180. While the Trumpian economy was a strength, that was simply a result of the strong Obama economy. Although Trump may boast a low unemployment rate, as Biden so eloquently pointed out, he screwed the United States over through manufacturing and trade deals, especially with China.

RACE AND VIOLENCE IN OUR CITIES

Biden attacked Trump for defending white supremacists after the Charlottesville rally; Trump responded to Biden’s accusation by bringing up Biden’s 1994 crime bill, which many have criticized for spurring mass incarceration. Breonna Taylor’s death was also mentioned, with Biden saying that he believes most law enforcement officers are “good people,” but arguing that the “bad apples” need to be “sorted out.”

Biden then called Trump “racist,” and described his plan to “reimagine policing” by incorporating more community policing and mental health services into public safety departments. Biden evaded when Trump asked him if he could name a single law enforcement group that endorsed his presidency. Wallace asked Trump to condemn white supremacist violence, and Trump countered by saying that the violence comes from Antifa, on the left. Biden responded that Trump’s own FBI director stated that Antifa is an ideology, not an organization.

Biden clearly came prepared with his opening statement on the issue of race, emphasizing a hopeful message of racial equality and unity. That bubble of calm was quickly burst by Trump’s attacks on Biden’s questionable statements about Black people in the past, beginning a cycle of deflection and personal attacks.

Toward the second half of this portion, Biden had to go on the defense. Trump attacked his views on the police force as “radical” while Biden tended to veer away from that depiction. Biden’s use of the “bad apple” metaphor to describe the police force was surprising considering the phrase’s rejection by many on the left.

Trump proceeded to make some comments about preserving the suburbs and the nature of the recent race protests that probably won’t sit well with anti-racist activists. After failing to thoroughly condemn the actions of the far-right and white supremacists, Trump deflected the blame for violent protests to far-left groups, particularly Antifa.

THE TRUMP AND BIDEN RECORDS

Trump talked about what he called his administration’s successful economy, while Biden said the Obama administration left Trump a “booming economy,” then condemned Trump’s relationship with President Putin; he also criticized Trump’s treatment of billionaires in comparison to the working class, and for calling the military “suckers.” Trump launched personal attacks on Biden’s son Hunter Biden, bringing up his discharge from the military over drug use. Wallace transitioned to Trump’s climate record; Trump, who said he wants clean air and water, condemned California’s forest management then conceding that emissions led to climate change. Wallace asked him why he rolled back climate regulations and Trump responded by saying energy prices are going “through the roof” and he’s improving the car market. Biden then talked about his climate plan, which included rejoining the Paris Accord.

As Wallace said, an election with an incumbent is almost always a referendum on their performance. Trump’s paltry appeal to voters comes across as whiny and unconvincing — he can’t blame everything on the coronavirus, no matter how hard he tries, which isn’t really persuasive coming from a person trying to convince voters that he deserves four more years.

Biden was far more reassuring to voters. He referenced Trump’s problematic comments on military heroes and actually acknowledged the threat of climate change, something Trump has continuously denied is manmade, instead choosing to blame California for not raking the forest floor.

Trump was disrespectful and obnoxious throughout this debate, but it was highlighted here. This is what we’re used to, of course, but it’s a needed reminder of Trump’s true character to those who haven’t been paying attention.

THE INTEGRITY OF THE ELECTION

Biden urged the American people to vote in the upcoming election, promising that he would accept the results of the election; Trump refused to make the same promise, expressing confidence that he would be declared the winner. Trump argued that unsolicited ballots — ballots that are sent to voters without prior request — would taint the result of the election, but Biden countered by saying that unsolicited ballots have worked in the past and will continue to work. Trump continued to describe what he called rampant voter fraud and ballot dumping, claiming that the Democrats were throwing out ballots for Trump in the last election.

On voting integrity, both candidates just repeated what they’ve been saying for the past few months. Biden’s message was surprisingly simple and bipartisan, simply urging viewers to vote. Unlike Trump, Biden made it clear that he would accept the election results, win or lose.

As expected, Trump wildly claimed this would be the most fraudulent election in history, despite the fact that multiple states used mail-in voting and many government officials have confirmed the system’s accuracy. Biden affirmed his complete trust in the mail-in voting system, while Trump painted graphic images of thousands of mail-in ballots being dumped in rivers.

Wallace asked if the candidates would urge their supporters to keep calm and wait for the results of the election, Trump answered yes but again refused to acknowledge the proven accuracy of mail-in voting, leaving us wondering what ends he would go to if he deemed the election fraudulent. Would he refuse to leave the office? Would he demand a recount? We’ll see in November, I suppose.

At the 90-minute mark, Wallace was clearly extremely relieved to end that tragic mess of a debate. I think NBC’s description of this debate as “a real low point in American political discourse” is pretty accurate.