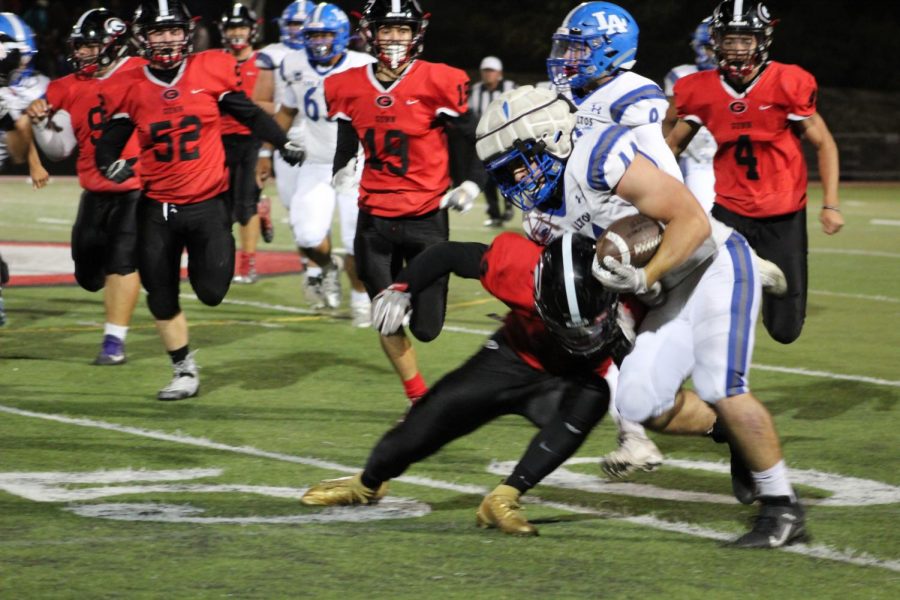 The frigid night of Friday, October 18 set the scene for a disheartening loss against the Gunn High School Titans for the varsity football team. After two and a half hours of unwavering effort, the game ended with a final score of 32-56.

Gunn’s offense throughout the game was efficient at creating large yardage plays, which means they were able to score quickly through running plays. The Eagles’ loss was mainly due to their inability to counteract the Titans’ quick scoring offense.

The Eagles started off the first quarter rolling downfield with an eight-play drive, or an offensive attempt, only to be halted by Gunn’s defense on the fourth down. The Titans scored soon after with a four-play drive ending in an explosive 45-yard dash to the endzone. The Titans were successful in getting the two-point conversion, putting the score at 0-8. 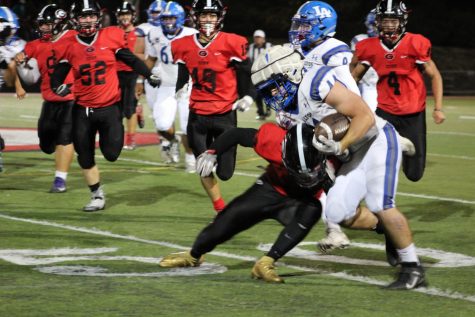 Los Altos was quick to strike back with a three-play drive, with running back junior Aaron Parker shooting past Gunn’s defense for a 45-yard touchdown run. 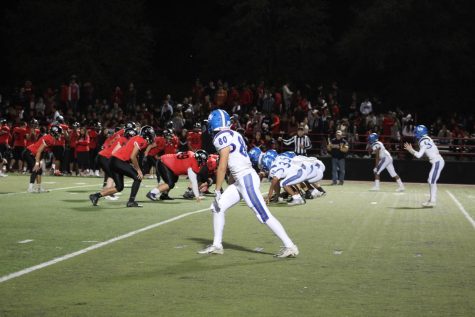 The Eagles set themselves up for an offensive drive. On the next conversion in the second quarter, the Titans ran yet another touchdown past the Eagles, settling the score at 8-15.

Quarterback junior Charlie Kinne ran the ball 30 yards into the endzone, but Gunn quickly retaliated with another touchdown. 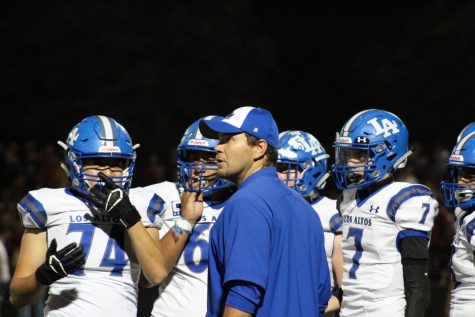 With the Titans leading at 14-22, Defensive Coordinator Coach Vince Juarez looks tense as he schemes with the team to devise a strategy for a comeback. 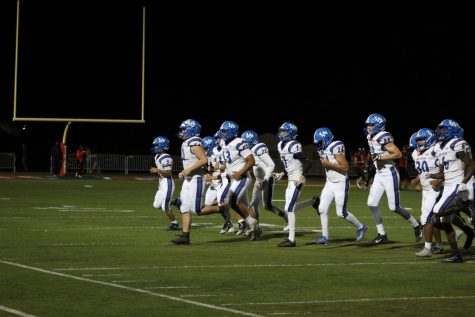 Los Altos warmed up their tense muscles in the icy air, preparing themselves for the battle to catch up to Gunn’s lead. 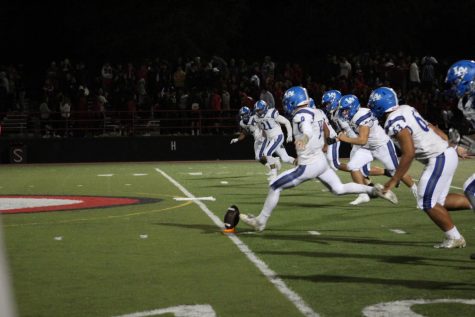 The third quarter opens with powerful kickoff. Gunn received and followed with a six-play drive that ended in a touchdown, progressing the score to 14-28.

“Both offenses put on a show during the game. Our defense just couldn’t get off the field, and our offense had to wait a long time. We just needed to minimize the large yardage plays.” — wide receiver sophomore Mingaang Park 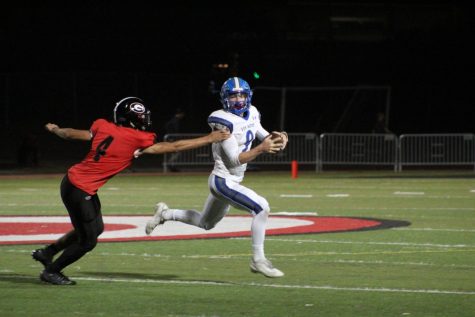 Charlie speeds away from a Titan defender in his pursuit to find an open player.

Later in the quarter, Aaron Parker ran the ball 20 yards the endzone, giving the Eagles a chance for redemption with a score of 20-28. 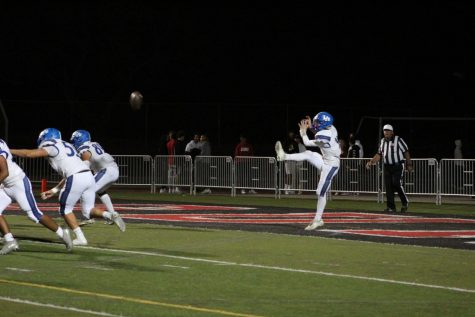 Charlie completes an onside kick, which is a deliberate effort to kick short, in an attempt to convert the possession back to the Eagles.

The ball was successfully snatched on Gunn’s 48-yard line by running back junior Bradley Saavedra for an Eagles recovery. Los Altos was later halted after five plays with an unsuccessful fourth-down conversion.

“Everyone’s effort this year is a lot stronger and our chemistry as a team has grown more than anything. This allows us to communicate better and take down important plays.” — wide receiver junior Noah Sucharzuk

Following an incredible 45-yard touchdown run past Eagle defense, Los Altos received Gunn’s kick at their two-yard line. The Eagles were forced to punt on the fourth down at only the six-yard line. The Titans then shockingly scored in one play, managing to break past the Eagles in an intense 47-yard run. 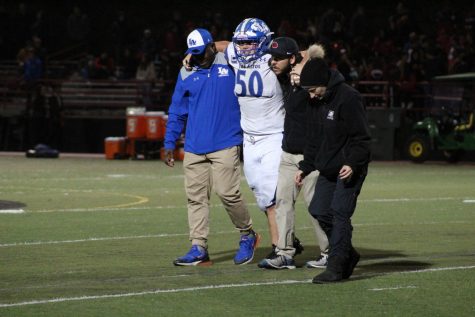 Senior guard Hayden Clish is helped off the field after temporarily injuring his knee in a defensive play.

The game swung back into action with an astonishing one-play 65-yard touchdown by Aaron. The Eagles attempted to run a fake play for their extra point, that resulted without success. The third quarter concluded with a final score of 26-42. 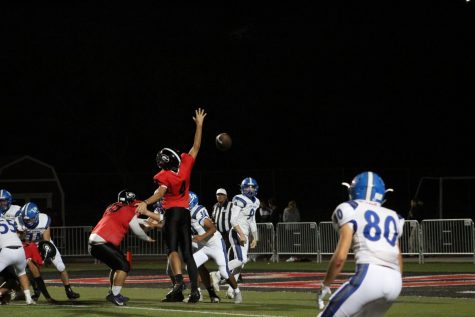 To start the fourth quarter, Los Altos kicked off and attempted another onside kick, but fell short on the recovery. Gunn started off at the Eagles 50-yard line and in a nine-play drive, scored via a four-yard touchdown run with a one-point conversion.

Gunn takes possession on the Eagles 38-yard line. They managed to sneak past Eagle defense and complete a 35-yard pass, setting up a 3-yard touchdown run. With a successful kick, the score hovered at 20-56.

Gunn had a short kick following the change of possession, with the Eagles picking it up on the 30-yard line, running the ball ten meters down the field. Los Altos grinded out a lengthy 16-play drive, and finally cleaned up with a five-yard touchdown pass by Charlie to wide receiver junior Cedrick Smith. The final score of the game was 32-56.

“It takes a couple of years to get fundamentals and techniques and proper training to really turn a program around. Hopefully, we’ll be able to continue our mission, and get these guys to where they need to be and where they want to be.” — offensive and defensive line coach Steve Rochlin