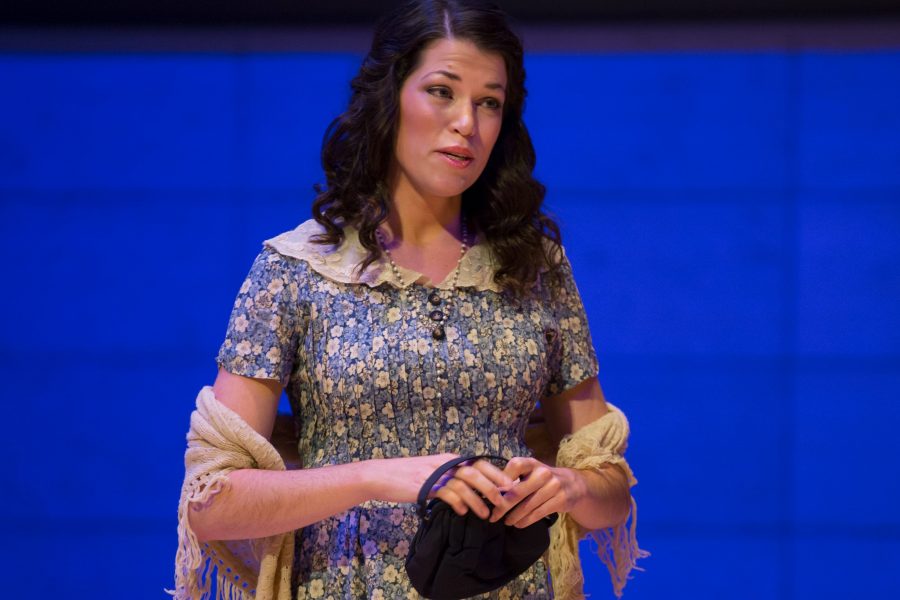 In the already jovial atmosphere cultivated by College and Career Center coordinator Andrea Gorman, new assistant Amy Goymerac has come to make her mark. Most, however, do not know that Goymerac has been training in classical singing for the past six years and is currently auditioning for opera companies. The auditioning process can take months and even years, and Goymerac needed a job to support herself in the meantime. Her familiarity with office jobs and appreciation of a school environment led her to her current position at Los Altos.

“Even before I was saying words, I would hum along and bounce along to songs when they would come on,” Goymerac said.

In high school, Goymerac joined choir and musical theatre. When it came time to plan for college, Goymerac, to the surprise of her teachers and parents, decided not to study music.

After talking with a friend who was studying philosophy at the time, Goymerac entered Cal Poly San Luis Obispo (SLO)as an intended philosophy major. However, when sophomore year arrived, Goymerac realized something needed to change.

“I was lonely,” Goymerac said. “I didn’t know what I wanted to do. I hadn’t made a whole ton of friends, and I just really, really missed singing… It was like I was missing a part of myself.”

After auditioning and being rejected by the choir, Goymerac was accepted into one of Cal Poly’s acappella groups, “Take It SLO.” Her experiences in “Take It SLO” and music classes led her to minor in music. However, the idea to train as a classical vocalist did not emerge until she attended a required student recital.

“I had no idea they could sing like that, and it was like a lightbulb went off in my head,” Goymerac said. “I was just like, ‘That’s what I have to do. That’s the next level.’”

The students performed in the classical method, singing in a style many would recognize as opera. Classical singers are known for their impressive range and resonating volume, performing primarily Italian, French and German songs written before the rise of popular music.

Goymerac immediately started taking voice lessons in college, and in 2011 she graduated with a bachelor’s degree in philosophy and a double minor in religious studies and music. She decided she would further develop her voice and seriously pursue a performance career.

After moving back to her hometown near Sacramento, Goymerac began working full time for the Roseville school district. However, having a full time job while simultaneously training and taking lessons proved to be exhausting, and Goymerac decided to go back to school.

She applied to graduate programs and was offered a spot at the San Francisco Conservatory of Music immediately after her audition. While at the Conservatory, Goymerac took classes in French, German, Italian, history, and vocal pedagogy and anatomy, among others.

“It was one of the best experiences ever,” Goymerac said. “[The faculty is] so talented and smart… It was the kind of thing where you learn about this whole world that you don’t know.”

When preparing to perform a piece, Goymerac spends hours researching all aspects of the piece. For every half-hour of singing, Goymerac estimates there are about five hours of research to do.

“A lot of working on a piece or preparing for it is actually just bookwork,” Goymerac said. “You have to either translate it yourself or find a really good translation you can trust… There’s memorizing all of the words, there’s coming up with your subtext, which is what’s going on in the character’s mind… That’s the whole acting part… doing your homework about the history of the piece of work.”

In December 2015, Goymerac graduated from the Conservatory with a Master of Music in Vocal Performance degree. Her current goal is to become an opera singer.

“I’m giving myself the next two or three years to just train my voice and audition everywhere I can,” Goymerac said. “In the meantime, I teach voice and I teach piano lessons… and then this job came along… I do this for half my life and then I do music for the other half of my life.”

Beyond her genuine enjoyment of singing, Goymerac feels a more meaningful connection to what she wants to do for the rest of her life.

“I do believe in the power of music,” Goymerac said. “I think that it speaks to people, even if they don’t know it. Vocal classical music is almost the most intense, greatest expression of human emotion possible, and opera really, really captures that.”