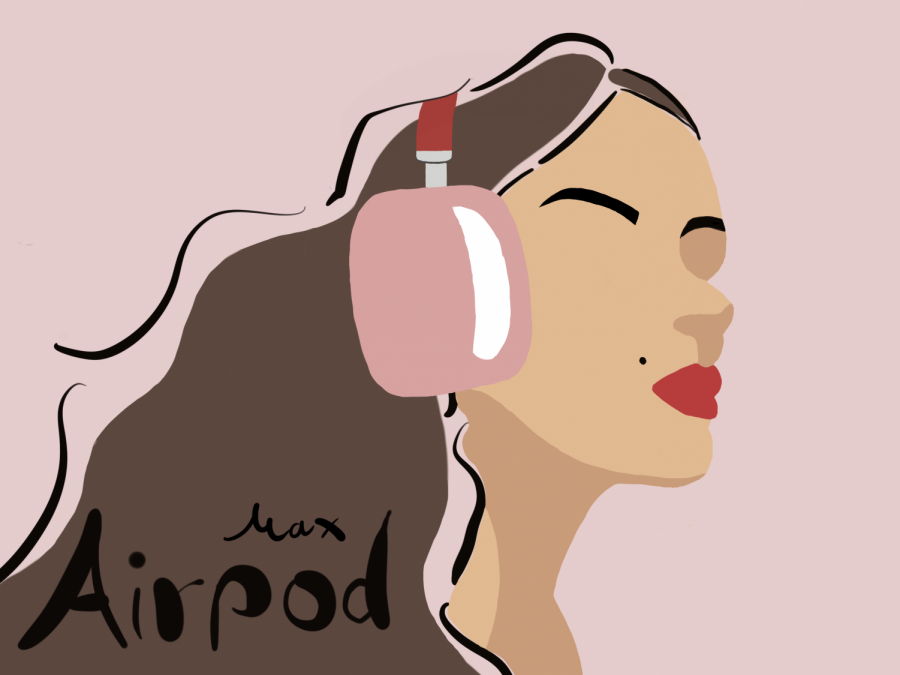 The Airpods Max is Apple’s newest feat towards branching out into other markets. However these elegant, high-tech headphones come at a far greater cost than imagined.

Well, Apple has gone and done it again.

Unlike years prior, Apple really does seem to be in the Christmas spirit this year. You’d think that after conducting its major annual event back in October —  in which they announced all of their new products to the public — Apple would be content with the new line of iPhone, Macbook, and home accessories they’ve released thus far.

Luckily for Apple enthusiasts, it seems Christmas has come early, as one more surprise product will be hitting the market: the AirPods Max, Apple’s first pair of over-ear headphones. The mesh headband, stainless steel frame and aluminum cups give the headphones a very sleek, even futuristic appearance. Unfortunately, though, for anyone trying to buy headphones for functionality instead of looks, the Airpods Max aren’t the best option.

As an Apple consumer, I admire Apple’s effort toward being more experimental with their products, but a whopping $549 is absurd for a pair of headphones. This alone will deter many consumers from buying them, and I don’t blame them. Sure, the design looks cool, but compared to other wireless headphone options like the Sony WH-1000XM4 and Bose Noise Cancelling Headphones 700, which are both high quality and cost half the price, the Airpods Max are too overpriced.

The headphones themselves are also quite heavy compared to many of their competitors. Even though 13.6 ounces is still light for wireless headphones, alternatives such as the Sony XM4 and Bose 700 weigh closer to nine ounces. Since headphones are usually worn for long periods of time, the lighter they are the better. A 5-ounce jump in weight is a major downside for the Airpods Max, as they’ll be more annoying and uncomfortable to wear over multiple hours.

Okay, now let’s get down to the nitty gritty of the AirPods Max: the technology inside. Straight away, Apple chose to brag about the revolutionary 40-mm dynamic drivers — which convert electrical signals into sound — in the headphones.

While the small size is impressive, Apple isn’t the first to implement drivers of this size into their headphones. Sony included drivers of the exact same size in their XM4, and other products such as the Shure AONIC 50 even have 50-mm drivers. These will all make the sound equal — if not better than — the sound provided by the Airpods Max.

Other features, like noise-canceling and transparency mode that help filter in and out noise from the outside world, are pretty standard that can be found on many other alternatives, such as the Bose 700s. In addition to these, the Adaptive Equalizer (EQ) — an equalizer that has technology to automatically change the bass and frequencies of the sound — takes away from the ability to customize the sound.

The only intriguing feature about the AirPods Max is Apple’s implementation of spatial audio via head tracking. This alters the way the sound is played depending on the head movement of the user, allowing for the audio to feel more dynamic and immersive. A feature like this isn’t found in very many wireless headphones and definitely adds a unique edge to the AirPods Max.

Honestly, there’s no doubt in my mind that the AirPods Max will sound fantastic. But in the end, paying $500+ for the product isn’t worth it. For all the audiophiles invested in the Apple ecosystem, I would say go ahead and spend the extra buck on the AirPods Max. However, for the average person trying to buy wireless headphones, I recommend saving a couple hundred dollars and investing in a different product.

I’m sure that someday the AirPods Max will become affordable, but until then, they won’t be the top contender on the market.