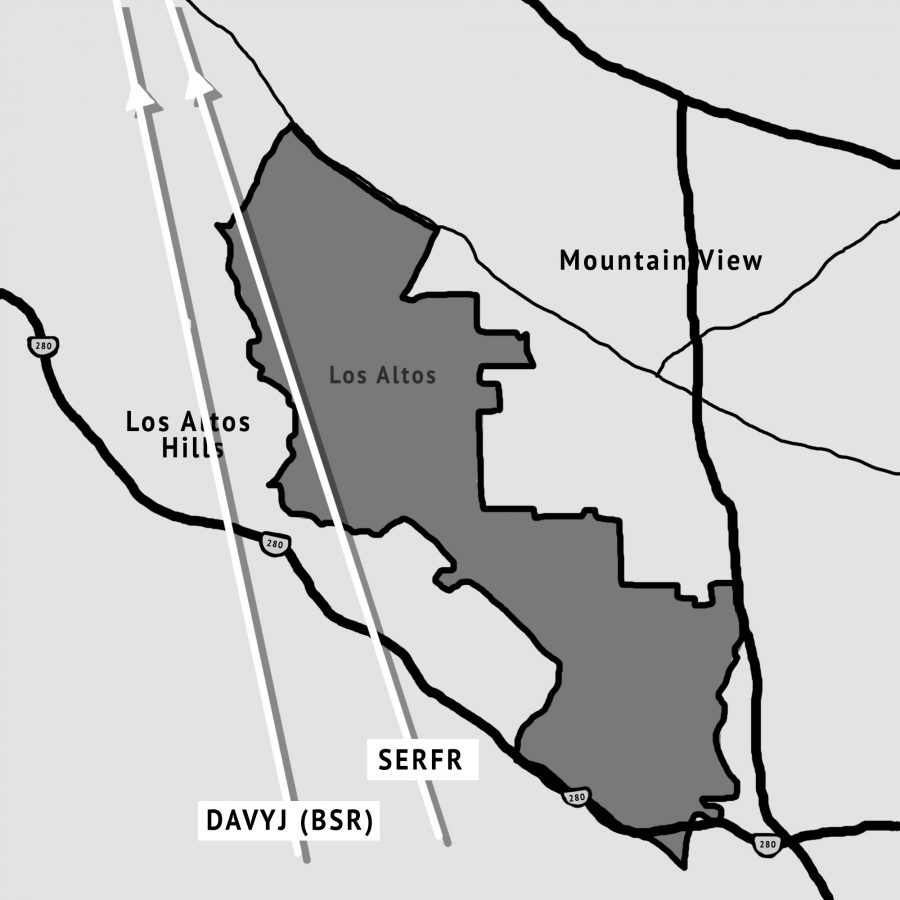 After meetings with dozens of attendees, debates that lasted for over six months and participation from counties across the Bay Area, the Select Committee on South Bay Arrivals sent a letter of recommendations addressing airplane noise to Congress members Anna Eshoo, Sam Farr and Jackie Speier on Thursday, November 17.

When the FAA changed the old flight path, named BIGSUR (BSR), that flew over Los Altos Hills to a new path called SERFR that flies over Los Altos on March 5, 2015, complaints over airplane noise rose from 1,227 per month to 302,475 per month for the new path. Eshoo, Farr and Speier created the Select Committee on South Bay Arrivals to address concerns from their constituents, including Los Altos residents, about airplane noise.

After six months of work, the committee passed recommendations for planes to fly higher, fly over fewer people, avoid noisy flight techniques and reduce noise with retrofits wherever possible. The three representatives will take these recommendations to the FAA and work with them to implement the desired changes.

Among the recommendations, the controversy centered around which flight path should be adopted. With eight members for the proposal and four against, the committee recommended DAVYJ, an updated version of the old path, BIGSUR, that would fly over Los Altos Hills and replace the current path.

“[Other advocates of DAVYJ and I] are very pleased that we were able to get the eight votes,” Los Altos Councilmember Jean Mordo said. “If we didn’t have the eight votes for DAVYJ, this whole committee would have only made minor improvements and would’ve been for nothing.”

Committee members expect the FAA to change the flight path to DAVYJ within the next eighteen months to two years. With the return to DAVYJ, planes will fly over Los Altos Hills again instead of Los Altos and decrease the noise level in Los Altos that caused the spike in complaints.

One of the largest issues with SERFR is its conflict with other flight paths. SERFR intersects with a path from San Francisco to the San Jose airport, which means planes on SERFR are forced to decrease in altitude and are louder to residents below. DAVYJ does not have this issue as it doesn’t intersect with the flight path from San Francisco to San Jose. Los Altos Hills Vice Mayor Gary Waldeck, who believed DAVYJ and SERFR had similar noise levels in general, voted for DAVYJ to solve this conflict.

“The FAA has been routing the flights going to San Jose under the paths from SERFR, and now they’re only 2,000 feet above the ground,” Waldeck said. “[With DAVYJ], there’s a three-mile difference and planes are not intersecting with [the other path] anymore — so in a nutshell, that solves the problem.”

For Mordo and other advocates of DAVYJ, the vote was especially difficult to pass due to chairman of the Select Committee and Santa Clara County Supervisor Joe Simitian’s decision not to support the path.

Simitian believed DAVYJ may solve airplane noise issues for Los Altos, but would only increase noise for other areas such as Los Altos Hills. For this reason he advocated for a short-term “50-50” compromise that would equally split noise levels between cities would have been optimal for all towns affected by the issue. The “50-50” compromise was essentially the midway between DAVYJ and SERFR.

“Folks currently under the track understandably want to send it somewhere else,” Simitian said. “Folks under the alternate track understandably don’t want it back, so I’ve suggested [to the committee] that the FAA do everything they can to reduce noise along the flight path, but to the extent that if there is any residual noise it should be shared among the two flight paths for the immediate future.”

However, the Select Committee ultimately decided to vote for DAVYJ.  Because DAVYJ will still disturb residents across its path, the committee also unanimously recommended to look for an ideal path in the future which would minimize the impact of noise on residents across the Bay Area. Some members of the Select Committee are skeptical of the feasibility of finding such a path because they believe moving flight paths only just moves noise complaints to different areas.

“In practice it’s very unlikely that you can find [an ideal path] because any change, even if it is under a smaller number of people, will be over people who didn’t have noise before,” Mordo said. “So it will still be a major change for some people.”

In order to deal with future airplane noise issues, the Select Committee also recommended creating a new successor board, which will work with the FAA and provide input.

“The Select Committee suggested to establish a group to work with the FAA to [deal with] South Bay routes,” Waldeck said. “This way, if the FAA is going to get input before they make a change, then they can hopefully avoid the hullaballoo that happened [with SERFR].”