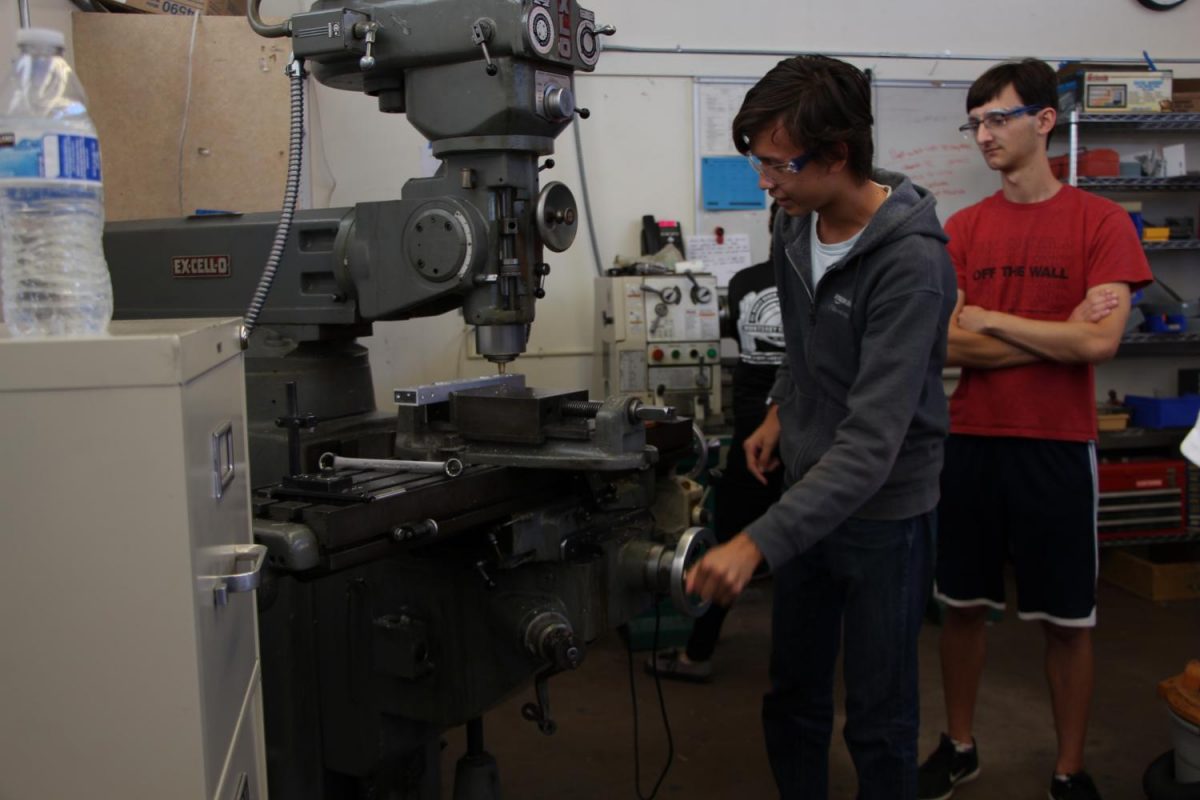 Robotics team member junior Oscar Bjorkman works with a mill, a highly precise machine that drills holes and cuts materials like metal and plastic to manufacture parts. The team expanded this year following their qualification to nationals, buying new machinery and doubling their class size. Photo by Emily Aronovitz.

By Justin Yu and Kristen Fan

Following the Los Altos Robotics team’s unprecedented first place victory at the Ventura Regional last year, the team has expanded to participate in a new competition. They’ve also received new equipment and space to work in by taking over half of the auto shop and adding an additional class section to accommodate a growing demand for the course.

Using funding from a state grant and Google, the team bought new equipment, including two 3D printers, a laser cutter and computer numerical control (CNC) routers. These will allow the team to manufacture custom parts, sheet metal and wood.

“With this funding, the immediate goal is to repeat last year and get to nationals,” team co-adviser Stephen Hine said. “We’re working having  our engineering programs pull everything together into a more cohesive engineering program.”

The team, which until now solely competed in the For Inspiration and Recognition of Science and Technology (FIRST) Robotics Competition, also known as FRC, is expanding to the VEX robotics competition to train new and more inexperienced staff.

VEX is more kit-oriented, which means the team will not have to design and manufacture parts by themselves. The competition will serve as a softer introduction to robotics for new members during the winter before the FRC season kicks into full gear in the spring, replacing an in-house mini-bots project the team had trained new staff with.

“We felt that VEX would give more structure and a better element of competition,” team co-captain senior Albert Kutsyy said. “In addition, it goes into winter, so we’re probably going to have people still working on VEX in the winter, people who are more interested in that than FRC.”

By combining experienced students with newcomers in the VEX teams, old members will be able to refine their mastery of skills while teaching new members fundamental concepts like how to drive a robot.

“We have newer people learning from the experienced people which is really important because we’re not learning from adults and instead learning from each other, and that’s what we really push for,“ team member sophomore Alice Kutsyy said.

The team’s plan to ease newcomers into robotics also includes having new students test out specialties before they begin work on competitions. In the first five weeks of the year, the team has set up rotations for each new student to go through to show them different jobs that must be filled when the build season start.

After this, they will be able to choose a specific area of expertise to focus on for VEX and FRC.

“People work on VEX, but also branch out and occasionally meet other experienced groups and get experience there,” Hine said. “Hopefully, in the following year they’ll be like, ‘Okay, I want to do code, I want to do machining or I want to do assembly.’”

Along with the ability to construct parts more efficiently with the new machinery, the team can build complex parts which would once have required mail-orders from professionals.

“[In the past,] the FIRST team would make their own robot, design everything for themselves, computer model it and send complicated things out to get machined by professionals,” Hine said. “We got new equipment now so we can actually do some prototyping and 3D printing where normally they’d have to send them out.”