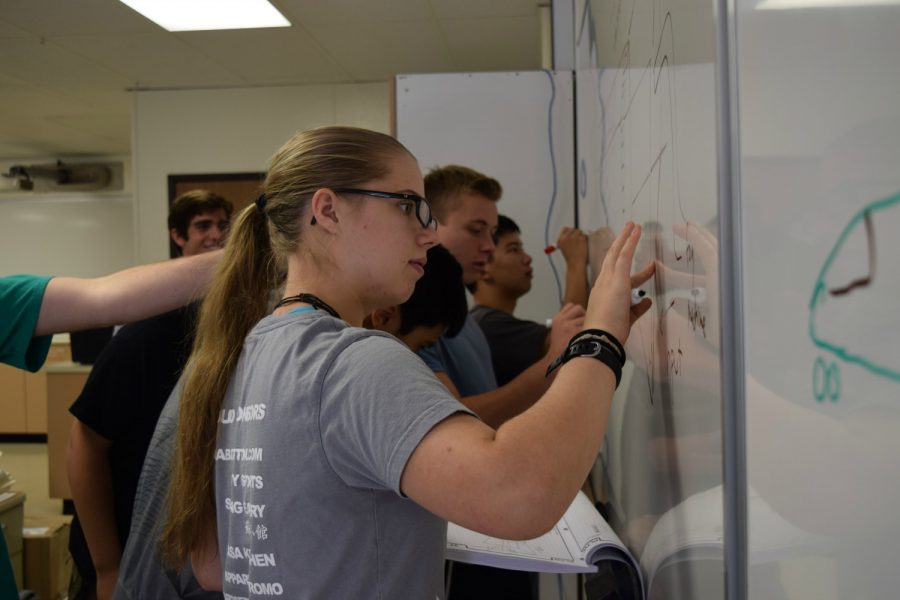 It’s not rocket science — except it is. New this year, Los Altos’ Aerospace Engineering class is the third course in the three-year engineering program and focuses on the physics behind the flight of rockets, planes and more.

While the first two courses of the engineering curriculum explore separate concepts, Aerospace Engineering combines the material learned in both introductory engineering classes for new applications and provides a more hands-on experience.

“It’s really well tied together,” engineering teacher Teresa Dunlap said. “Everything students learn in the first and second year is now merging into what they’re going to need for [Aerospace Engineering].”

Unlike traditional science classes, students perform “instant design challenges” instead of labs. A recent challenge had students create paper airplanes to find out how far planes could fly with different designs.

“We changed [the paper airplanes] and learned more about what does what on an aircraft,” senior Chris Carter said. “It’s kind of hard for a paper airplane to have all the different components of a plane, but you have to play around with what could work.”

So far, students have studied the principles of airfoils, which are the basic forms of wings and fins, and designed airfoils using modelling programs. Later in the year, they will build their own wind tunnels and rockets.

For Chris, the specific applications of engineering introduced in this course are unique to other STEM classes at Los Altos.

“In previous [engineering courses], all the stuff we’ve done has overlapped with the other science classes,” Chris said. “The big difference is that [Aerospace Engineering] is specifically focused on airplanes, airfoils and aviation.”

While the curriculum requires expensive machinery such as wind tunnels and 3D printers that cost upwards of $5,000, students have improvised to make do without all of the recommended materials.

“We’re playing it by ear depending on what items we get,” Dunlap said. “Right now… we’re having [students] do some research on wind tunnels, and they’re [going to] actually try and build their own wind tunnels.”

Other third-year courses Project Lead the Way offers include Digital Electronics and Civil Engineering and Architecture. While Los Altos currently only offers Aerospace Engineering, Dunlap would like to add other options for engineering students to take.

“Ideally we could have Civil Engineering and Architecture as another option,” Dunlap said. “Hopefully [Aerospace Engineering] will hold students’ interest at least for a little while until we grow the program a little more.”

The Aerospace Engineering class is much smaller than the Introduction and Principles classes, mainly due to the fact that students have found it difficult to fit  an engineering elective in their schedule for three years in a row. In the future, the department hopes to reach more underclassmen in order to avoid this decrease in enrollment.

“It’s always tough for people to fit [Aerospace in their schedules] because it’s hard to fit an elective three years in a row,” Dunlap said. “I think we’ll have to promote it a little better at the freshman level so that we get more freshmen and sophomores signing up.”

Students currently enrolled in the class appreciate it for the freedom they have to design their own projects.

“[The class] gives a lot of freedom, which allows us to be creative in approaching certain problems that deal with the physics of flight,” senior Scott Cairns said.