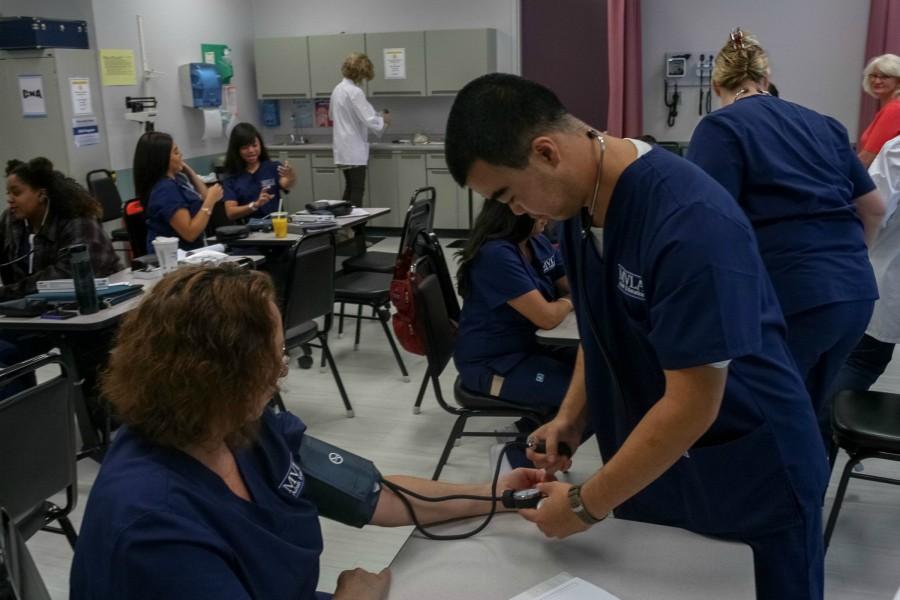 On June 6, 2015, California State Governor Jerry Brown approved Senate Bill 104, allocating a block grant of $500 million to school and community college districts across the state. Funding from the bill will provide nearly $3.2 million to the Mountain View-Los Altos District’s Adult Education program this year.
The Adult Education program provides sevices to more than 4,500 adults and teenagers in the area. It includes English as a Second Language (ESL), as well as a primary education program that focuses on General Educational Development (GED) test preparation and High School Diploma courses.
The program also includes Career Technical Education (CTE), which allows students to earn credentials in healthcare, finance, business and IT jobs by taking a course that lasts 9 to 12 weeks.
In addition to these core services, the Adult Education program organizes community interest programs that range from Arts and Crafts to Physical Fitness.
The main campus is located at 333 Moffett Boulevard in Mountain View. Satellite facilities around Mountain View and Los Altos allow students to receive instruction closer to their own homes as well as to receive career training at hospitals and tech firms.
“The satellite clinical placements [take place at locations such as] El Camino, Stanford and Palo Alto [Hospitals], where we have arrangements with them for people to go out there and do their clinical hours,” Moody said. “A lot of [students] get hired because of that.”
Maintaining the program is not without its difficulties, and the block grant has the potential to solve some of the problems for which the Adult Education program did not previously have the resources.
“The majority of our teachers are part-time, and that has its own inherent problems,” Moody said. “If they find another job, of course they leave… So we are constantly having turnover, and without that continuity, it is really hard to have a successful program. [It would] be like having a sports team where every year you clean out the whole group and start over again.”
Now, however, the additional funding will enable the program to hire 10 full-time teachers over the next 3 years and create continuity.
“With this ability to hire two or three [formerly] part-time people [to full-time positions each year] in each of the core areas, that gives us a nucleus that stays together, gives us continuity, works with the coordinators who are full-time, so that the coordinators are not perpetually hiring people and doing interviews,” Moody said.
The Adult Education program has created a new position, the Transition Advisor, which serves a similar function to a counselor and assists students in transitioning to community college and work opportunities.
“Imagine when you were getting ready to apply for school if they said, ‘Good luck, there are good schools out there, and our teachers teach you content and English and math and social studies, but we do not really have anyone to help you with navigating the college system,’” Moody said. “We need someone who is dedicated to helping our students transition to college [or] to work.”
The Adult Education program is working with the Foothill-De Anza Community College District, Palo Alto Unified School District and the Fremont Union High School District as part of the bill’s Regional Consortium system.
While $335 million of the block grant was allocated to all districts based on each district’s expenditure in the 2012-13 school year, $165 million was allocated only to groups of districts that formed consortia, which will create plans to distribute the funding within each consortium.
Moody said that working as a consortium has enabled greater communication between the districts, resulting in Adult Education field trips to other schools as well as students from other schools coming to the Adult Education facilities for Career and College Fairs.
“[The consortium system has] been a lot more connecting and collaborating, versus, [we] just coexist but never overlap and communicate,” Moody said.
Within a consortium, the districts are required to align their assessments as well as to create standards for measuring students’ success after they graduate.
“We have to find some uniform system … where we can measure and record and track what is happening after they go through our CTE program,” Moody said. “How many get jobs?… Where do they go? How long are they there? How much do they make?… Right now there is no system in place.”
The Adult Education program is also communicating with the Department of Education and the Chancellor’s Office about how to organize the consortium. The discussions often involve Promising Practices: methods, models and funding plans for consortia that have been successful around the state.
“[They will say] here is what this area is doing, and they are having a lot of success, you might want to try this,” Moody said. “Here is their funding model, and this is how they distributed the funds based on their goals, so you might want to look at this.”
Both Moody and Assistant Director Brenda Harris said that the new funding will help to solve problems faced by the program. But Harris said that the bill is about helping the students, not the administration.
“Our students are getting jobs,” Harris said. “[And] that is the biggest goal that we have… It’s not about making the administrator’s life easier, it is to keep challenging me to do and focus on the student to give them the best opportunity they can have.”