A peep into Peet’s 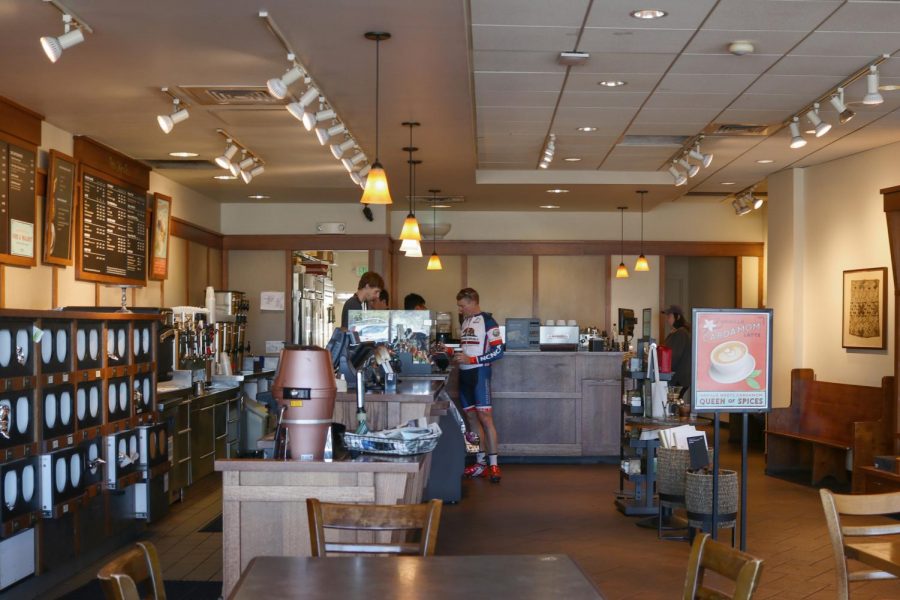 Going to Peet’s Coffee is a thoughtless routine for most. We walk in, wait in line, tell the cashier our daily order and wait for the barista to call out our name. However, what we may not consider is that the cashier that took our order is also training to be a barista, and that the barista who made our coffee had to take hours of classes before they could make your iced pumpkin latte or your cappuccino.

Should you visit the Peet’s Coffee on San Antonio Road and El Camino Real, you may find a Los Altos student serving you your coffee. Getting hired at Peet’s is like most other jobs. Applicants have to send an online application and then get an interview. Once an applicant is hired, they become a team member. They are not a barista yet and cannot serve drinks.

Senior Jessie Carlson has been working at Peet’s San Antonio since June. She says that there’s a large difference between a team member—who works as a cashier and heats up food—and a barista who has been trained in the art of coffee making.

After working for a couple of months as a team member at the register, employees undergo barista training, learning to make drinks. Once a store manager is satisfied with the barista’s performance, they are sent to official training from Peet’s. This training starts with a coffee and tea tasting class where trainees familiarize themselves with what they will be making as baristas. For example, senior Jason Sandell learned that the only differences between a latte, macchiato and cappuccino are the order in which the shot of espresso goes in and how much foam is in the milk.

“People think an Americano is something super fancy but it’s literally just hot water with a shot of espresso in it,” Jason said.

Once that first tasting session is complete, trainees take an introduction to drink-making class at Peet’s Menlo Park, in which trainees learn barista basics: how to steam milk and make basic drinks. In order to receive their final certification, baristas have to make a traditional cappuccino and draw a heart in it with foam. The heart is the hardest part of the certification, so baristas get as many tries as they want at it.

“It [is] hard because … you can do everything right, and at the last second … you don’t make the tail of the heart right [and then] it doesn’t turn out how you wanted,” Jessie said.

An assistant manager tastes the drink, and if everything is up to standard, employees receive their barista certification. The certification process is standard for Peet’s nationwide. Working at a coffee shop can be a tough job. For example, if a Peet’s employee is working a morning shift, they have to get to the store as early as 5:30 a.m. in order to open the store at 6 a.m.

There is a steep learning curve that comes with working at a coffee shop.

“I needed to learn how to grind beans, how to make bar coffee, how to clean up the area, how to do closing and morning shifts, and those are things you can’t just learn in a week,” Negar said.

During the work day, baristas have to manage many responsibilities beyond the bar.

“There’s more than just making drinks going on,” Jessie said. “You have to worry about how many cups are out on the floor and make sure the napkins are restocked, and then people will come back and say, ‘There’s no almond milk sitting out on the counter and I need it for my drink.’”

However, in spite of the stress of the job, Jason find reward in it. He has had to learn how to balance people’s impatience with the time that it takes to make a good drink.

“Gaining real world experiences at a young age is pretty useful,” Jason said. “It’s [a] good life skill to [learn] how to deal with [rude customers] and not be rude back to them.”

Jessie takes pride in the service that she provides. She enjoys making drinks in advance for regulars and interacting with other people at the shop.

“It’s fun to make something for [customers],” Jessie said. “I really enjoy the people at the store, so I would definitely recommend [working at Peet’s], because all seems good to me.”