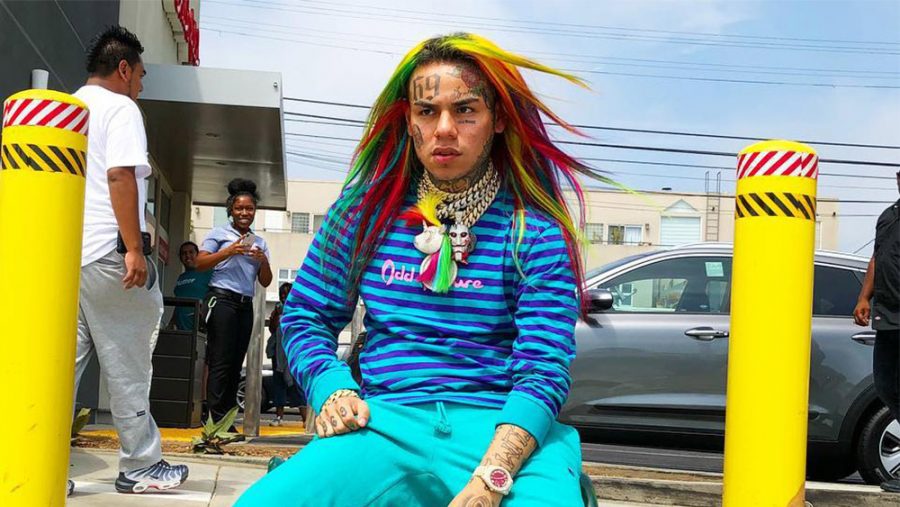 Internet sensation and rapper 6ix9ine just released his newest album, “Dummy Boy.” Despite being locked up in jail and having the album leaked weeks before, 6ix9ine nonetheless dropped the album on Saturday, November 17. Immediately, a couple of songs such as “KIKA,” “FEFE” and “TIC TOC” were in the Top 25 U.S. However, despite the success of the album, it felt like a bunch of different projects lumped together into one disjointed piece. He did managed to pull a few big names together, such as Lil Baby, Gunna and Kanye West who at least made the listen a bit more interesting. While it did have a couple songs hit the top charts, as a whole, the album fails to deliver any deeper message; rather than a focus on an idea of importance, it attempts to achieve popularity through hype and word of mouth to gain popularity. This does seem somewhat appealing at first, but soon causes the album to become boring to the listener without any true meaning to stay for.

Throughout the album, 6ix9ine calls out those who’ve dissed him before, such as Trippie Redd. In the first track “STOOPID,” 6ix9ine attacks New York radio host Ebro Darden, who previously said 6ix9ine was a “disrespectful-a** kid” and “a clown” by saying, “That ni**ga, Ebro, he a b*tch.” He continues to go after more artists in “TATI,” this time firing shots at the artist he is most known to have beef with, Trippie Redd. The two have had problems ever since Trippie first found out about how 6ix9ine sexually assaulted a child. 6ix9ine asks, “Why you watching me? You all on my IG. Why you stalking me? You don’t even follow me” implying that Trippie does look over all his posts even though they aren’t friends anymore. It seems that 6ix9ine is desperate for some sort of reaction and attention, and to do so he will call anyone out even if they haven’t bothered him at all.

Next on the album are two songs featuring Nicki Minaj: “MAMA” and “FEFE.” At best, the two are mediocre as they become very repetitive. Both songs only consist of flexing and very childish rhyme schemes, such as “Say he f*ckin’ with my posse, copped me Khloé like Kardashi’” without containing any true contribution to the album. The melody of “MAMA” seemed good at first, but it was supplemented by dull lyrics and lackluster vocals. Both these songs were clearly created to fill song quotas on the album.

With the next songs “BEBE” and “MALA,” 6ix9ine tries a new approach to his album. And not surprisingly, they are completely out of place. Featuring Anuel Aa, a Cuban rapper, 6ix9ine tried his hand at what appears to be Spanish R&B. However, the final products don’t sound good. Thrown in the direct middle of the album, the song throws off the entire mood of the album. Whether he meant for them to be an interlude or just for fun, they turned out to be a disaster. And it makes sense that they didn’t work at all because this was the first time 6ix9ine ever tried to try such an ambitious crossover in an album. These two songs should have been placed in a seperate album, as they certainly didn’t belong in this one.

“Dummy Boy” is just a very inconsistent album. By attempting to draw things from many parts of his personality, he created what felt like three separate projects all mushed together in a random fashion instead of thinking about which songs would actually sound good together. This album felt more like an experiment versus a truly well thought-out piece, but perhaps that’s just the way 6ix9ine is always going to make his music. Hopefully, in the future, we can see the true potential of 6ix9ine, so long as he can get out of jail.