Three seniors, one goal — the start to a comeback season 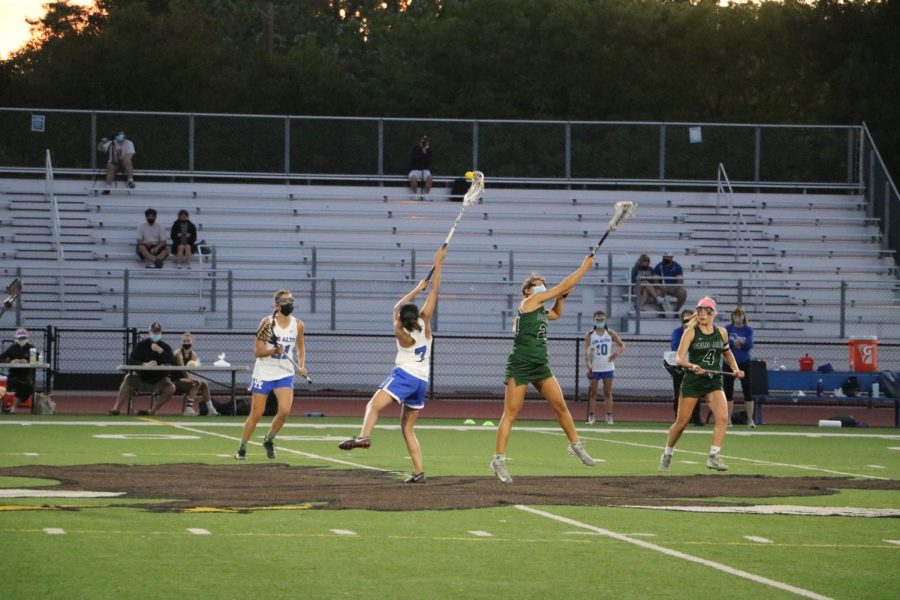 Junior Diya Gupta reaches to catch the ball ahead of a Palo Alto High School defender. The Eagles lost to Paly 17–0 but went on to win their next game against Wilcox High School 14–5.

This year, the varsity girls lacrosse team faces an unprecedented season, but not just because of COVID-19. With parents as coaches and only three seniors out of the team’s 19 players, the Eagles have started their season at an unusual disadvantage — but this hasn’t stopped them from enjoying their time on the team to the fullest.

The Eagles’ three seniors, Megan Quinn, Annelisa Faché and Anne-Sophie Geldmeyer, all felt that their lacrosse experience lived up to their greatest expectations. Each athlete demonstrated resilience and leadership throughout their time on the team, and they looked forward to each new season.

“I joined lacrosse sophomore year because I wanted to be on another team sport, after having quit soccer and because it looked fun,” Anne-Sophie said. “After joining, I knew I absolutely loved lacrosse, even though I had no previous experience. The team was incredibly fun too.”

Annelisa’s lacrosse journey is almost identical to Anne-Sophie’s, as she joined the team as a sophomore after a 10-year soccer career. Megan, though, has played for Los Altos High School throughout all four years of high school after being introduced to the sport in elementary school.

Megan’s previous experience with lacrosse, alongside the lack of official coaches, led to her mother taking over this year’s team. The 2017 season, their freshman year, was the last time they had official coaches. The following year the field hockey coaches led the lacrosse team, but after that, two parents stepped up to coach and continued for this year’s season.

“Because we don’t have actual lacrosse coaches, it’s definitely been difficult learning the rules of the game and how it’s played,” Megan said.

Though the athletes are appreciative of all their coaches, the lack of consistency and lacrosse-oriented experience in their training has made their seasons all the more challenging.

“Both our coaches are super nice and I’m so grateful that they showed up for us to be able to have a season,” Anne-Sophie said. “But they don’t have a lot of experience in lacrosse so that has just made it harder to learn our full potential.”

Not only has the coaching been unpredictable, but the team has had to practically start from scratch as many players lack experience. On top of it all, Anne-Sophie is currently out of commission due to a knee injury. However, the number of new players is something the Eagles have welcomed with open arms and the seniors hope the younger athletes continue to play in future seasons.

“This season is definitely a bit of a transition season for our team because we have a lot of players that were new to lacrosse either this season or last season, so there’s a lot of work that we need to do to build up our skills,” Annelisa said. “However, we are seeing that with each game we’re improving — even though the score might not reflect it — so that’s really exciting.”

Despite the new challenges each season brings, the seniors have made irreplaceable memories throughout their time on the team. From scrimmaging the boys lacrosse team to dressing up before games to their annual “Lax Olympics,” the girls agree that their bonding activities throughout the years have made the team what it is today.

Now, as they return to the field as seniors, these three Eagles are settling into their new roles on the team.

“Since the seniors usually lead the team and act as captains, I’ve had to step up to lead drills and get us ready for games,” Annelisa said. “It’s helped me get to know the team better since I have to be more aware of if my other teammates need help with specific aspects of the game and sometimes do one-on-one or small group drills.”

As the girls take on their final lacrosse season with LAHS, they are determined to make the most out of it and improve the team to the best of their ability. After a rocky start losing their first four games against Saratoga, Gunn, Los Gatos and Palo Alto High School, the Eagles had their first win 14–5 yesterday against Wilcox High School.

“We were definitely playing better together,” Annelisa said.  “We had a really good practice the day before so we were coming into the game ready to start strong.”

After the team’s first success, the girls are eager to keep working hard towards their comeback season. But most importantly, they are excited to keep having fun and strengthening the team.

“I’m just hoping for some good memories and stories, and I hope that the other girls have fun and choose to stick with it. Pun intended,” Megan said.