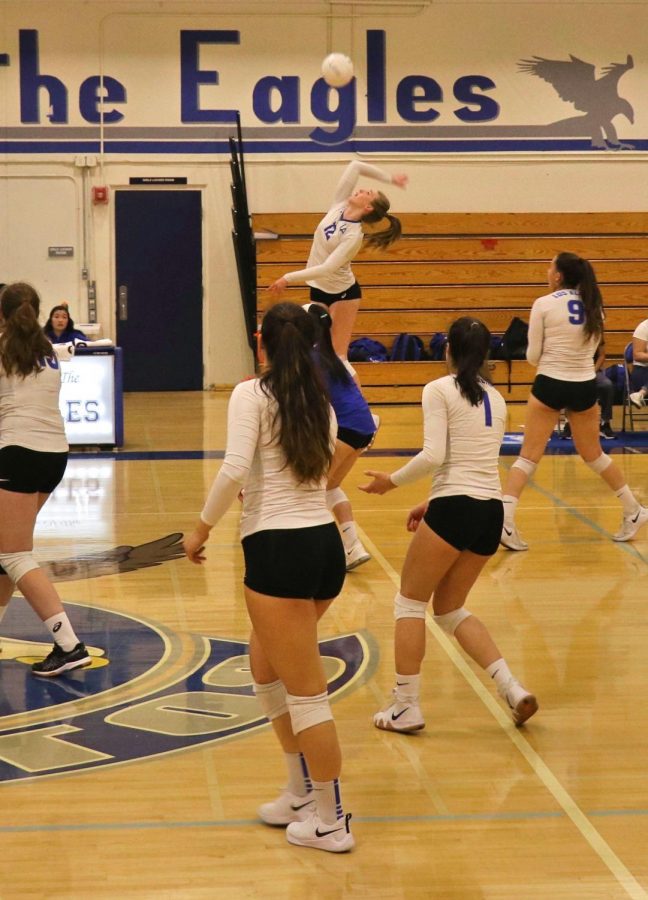 Sophmore Naomi Cremoux spikes the ball in a 3-1 win against Chico High school. After learning about the fire that threatened the homes of several on the Chico team, the girls varsity volleyball team decided to hold a fundraiser for Chico citizens at their next NorCal game.

On November 8, as the Northern California fire raged through the town of Paradise and near the city of Chico, the Los Altos varsity girls volleyball defeated Chico High School in a 3-1 victory during Round 2 of the NorCal tournament. However, unbeknownst to many of the Chico players, many of their families had to vacate their homes while they were competing. Wanting to help, the Los Altos girls varsity volleyball team is holding an impromptu fundraiser for the residents of Chico during their NorCal semifinals against Aragon, which is a home game on Monday, November 12 at 6 pm.

After discovering the impact of the fire on Chico, the Los Altos volleyball team was horrified by how much the Chico players had lost.

“The coaches told us [about the fire] in the team room,” junior Alice Kutsyy said. “We were all really shocked about how bad it was, and it was just heartbreaking.”

After the game, the girls were preparing to go home when they ran into a few of the Chico girls. Soon, the Chico players confided in a few of the Eagles players about their tragic stories.

“They were crying because they lost so much… and we went over and supported them,” Alice said. “The entire atmosphere was really sad, but those girls were still really strong. They still kept going. They were crying but they were…looking forward and thinking it’s gonna be okay.”

Wanting to do more to support the girls, the Eagles were inspired to hold a fundraiser. Now, in addition to the volleyball team, multiple clubs, such as LAAL and Blue Crew, are also contributing to the event.

“We [empathize with the Chico girls] and we’re trying to help—that’s why we’re doing the fundraiser,” junior Claire Kwok said. “We are trying to reach as many people are we can, and the LAAL Club and Blue Crew [are] helping us with this so that we can really raise more.”

Everyone is encouraged to go to the game and donate basic necessities such as toiletries, school supplies or a monetary donation. The varsity team hopes to receive as many donations as possible so they can distribute the items to the Chico players and residents. Though the Eagles will primarily accept donations during the Argon game on November 12, they hope to extend the fundraiser to “Awards Night” on Wednesday, November 14.

“Even if you don’t want to watch the game, come by and donate,” Alice said. “I really encourage everyone to come donate what they can because our houses are still standing so we have [items] to donate.”