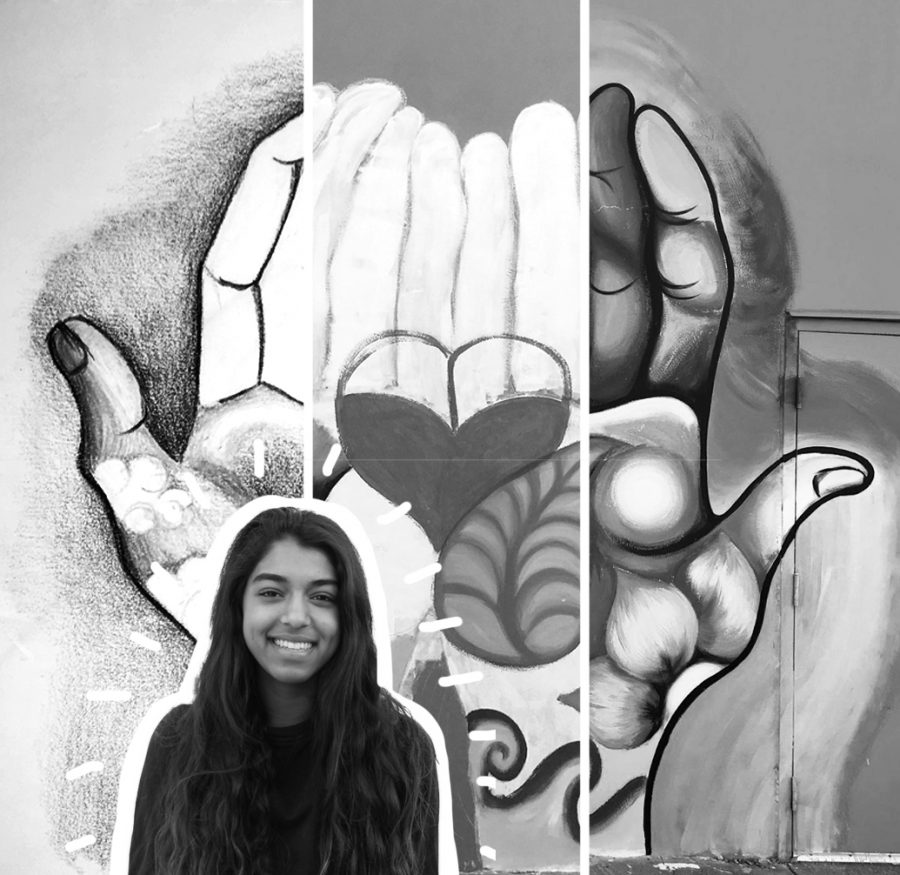 1: Kavya’s initial sketch of her visioned mural with colored pencils in her notebook. 2: She starts to draw and paint on the wall, trying to illustrate her vision before adding all the details. 3: Kavya’s finished mural for the Boys and Girls Club displayed in San Mateo.

Each day at the Boys and Girls Club of San Mateo, children pass a vibrant mural created by  sophomore Kavya Ramamurthy. Last summer, she painted the mural which illustrates a set of hands carrying colorful flowers, leaves, waves, and hearts for the Girl Scouts Gold Award project.

The Gold Award program’s purpose is to allow young women to make a change in communities that need it the most.Through her mural, Kavya has been able to exemplify the Boys and Girls Club’s mission: to provide a safe and supportive environment for children of all backgrounds.

It was important to Kavya that the club’s logo was included in her mural, which illustrates two people holding hands.

“I thought the hands were really symbolic of working together,” Kavya said. “And I think the colors are symbolic of diversity.”

Ever since she was young, Kavya has been drawn to art. Aside from taking high school painting and drawing classes, Kavya is a self-taught artist who dabbles in different mediums of art like drawing, sketching, oil-painting and more recently, acrylics. Her mother, Shama Ramamurthy, has a degree in art and taught art to young kids. She supports Kavya in pursuing her hobby by encouraging her to explore new projects. To Kavya, art acts as a form of relief from her day’s obstacles.

“It’s an outlet,” Kavya said. “It’s something that I can do when I’m stressed out and it’s just a way to express myself.”

Through her Girl Scouts Gold Award project, she has been able to express both her passion for art and leadership. The Boys and Girls Club served as an opportunity for Kavya to both educate the kids and complete her project.

“These children are not often granted the opportunity to express themselves through art,” Kavya said. “So I worked to incorporate their ideas into the mural and the creation process.”

Kavya drafted sketches of the mural and brought them to the kids at the club, receiving feedback and comparing ideas to develop a concrete idea of what they’d like as a mural. On some of the days that Kavya worked on the project, kids age eight to twelve were even given parts of the mural to paint so that they could feel more included in the project.

By using the grid method, a technique that proportionally enlarges an image onto a canvas, on a digital platform, Kavya was able to sketch out her design before painting it with water acrylics on the wall. In total, the process took roughly five weeks: three for planning, and two for painting the mural. On average, she worked on the mural for up to three hours a day for three to four days a week.

“I’m just proud of Kavya for having done that and I’m happy that she takes pride in her work,” Ramamurthy said. “It’s a little frustrating because everything has to be so perfect; she’s a perfectionist. It took her a long time; it would have taken me 50 hours but it took her 110 hours. Each and every line has to be exactly what she thinks it should be. That’s Kavya.”

Although Kavya doesn’t see herself pursuing art as a career, she has already received requests for new art projects. After seeing her mural in front of the Boys and Girls club, the club staff want her to teach summer art lessons to the kids. Kavya is also thinking about painting a mural for a grocery store this year, but she has not yet finalized the project.