There’s Nothing to Fear Except Fear-Mongering 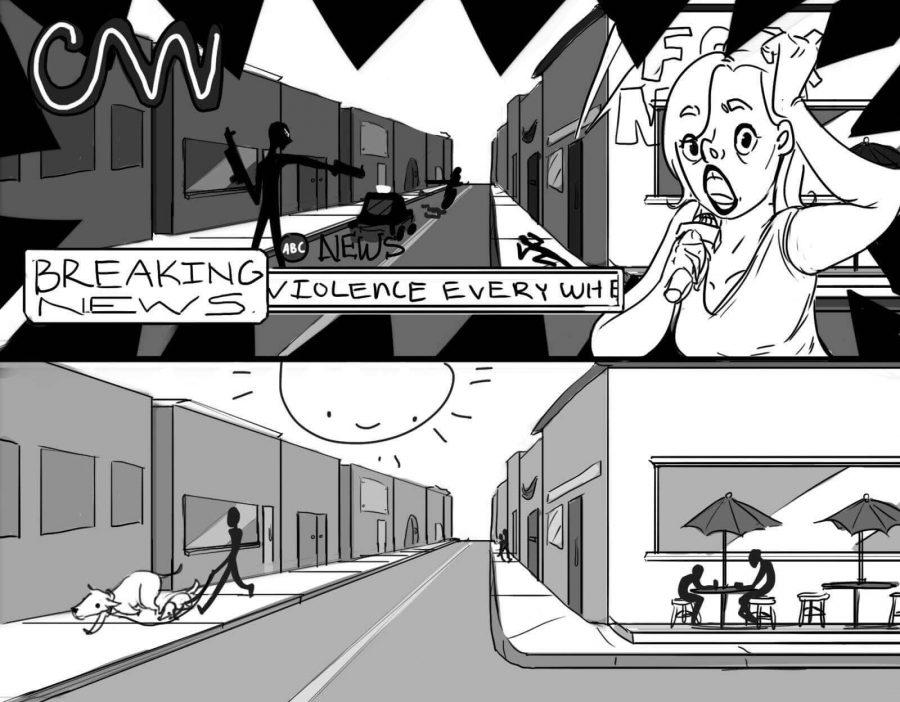 “Two Brussels police officers stabbed in suspected terror attack.” Major news organizations ran this headline recently. In doing so, they demonstrated a problem with today’s journalism. In a world overrun with an abundance of information, the motto “if it bleeds, it leads” has grown to new extremes, and news organizations often overreport stories of violence, creating images about how the Islamic state will conquer the world. The media deliberately arouses public fear through exaggeration, the definition of fear-mongering.

In reality, since 1991 violent crime in the U.S. has decreased by 51 percent. The FBI released a report this June which found that the U.S. homicide rate is at a 51-year low, and that homicide rates have steadily declined over the past 25 years. But according to polls by research-based consultancy company Gallup, Americans believe that crime is rising. This fear extends to terrorism, and another Gallup poll conducted in 2015 concludes that public concern for future terrorist attacks rose from 39 percent in 2014 to 51 percent in 2015.

According to the narrative presented by the media, ISIS, Al-Qaeda and other terrorist organizations threaten our safety with their schemes. Journalists flock to enticing headlines created by tragedies like Paris, Brussels and Nice, and in doing so overreport them.

But widespread media coverage of terrorist attacks may actively increase future terrorism. Terrorist groups rely on media attention to inspire fear in the public, reach potential recruits and spread their message. Every time terrorists execute an attack, the media is incentivized to report about it, which pushes more attacks for more coverage. As long as the public buys into the market of fear, media will continue to overcover foreign terrorism and ignore the much larger problem of domestic terrorism.

However, acts of domestic terrorism, acts that are intended to intimidate or coerce a civilian population, are a much larger threat. The Washington Post finds that since 9/11, domestic terrorist groups have killed 48 Americans while individuals linked to foreign terrorist groups have killed 26 people. Because the media overcovers foreign terrorism, the public views systemic problems like racism and white supremacy inspiring domestic terrorists as much less of a threat than foreign “extremists.” To the public, the typical terrorist is a radical Jihadist, not a radical American. This doesn’t mean foreign terrorism isn’t a threat nor that racism is completely ignored in the U.S., but that the looming threat of global terrorism overshadows less publicized issues and harms of white supremacy.

Another consequence of fear-mongering is the U.S.’ thriving gun culture. The constant exposure to violence and perceived threats makes the public more likely to feel endangered and places them in constant paranoia. As a result, people are more likely to lash out and pull the trigger when confronted with potentially non-lethal situations. In an attempt to defend themselves from non-existent threats, people buy more guns, which explains why the number of guns manufactured in the U.S. doubled from 5.5 million in 2010 to around 10.9 million in 2013. In addition, there are around 357 million guns in the U.S., which is 38 million more than the nation’s population.

Even with a large number of guns in the nation, mass shootings like Columbine, Sandy Hook and Orlando are just as disproportionately represented in the media as large terrorist attacks. They compose less than 2 percent of annual gun deaths in the U.S. Suicide accounts for a whopping two-thirds of gun deaths, but those cases, along with smaller-scale gun homicide, almost never receive the same amount of coverage that mass shootings do.

Because of the disproportionate coverage on mass killers, copycat killers are inspired to commit mass killings. Such copycat killers want the publicity that accompanies mass killings and rationalize the idea that they can go out with a bang so they might as well. The media covers these copycats, which in turn only leads to more tragedies. According to researchers at Arizona State University and Northeastern Illinois University, 20 to 30 percent of mass shootings and school attacks are inspired by previous ones.

The point of this is not to say that the media should stop reporting about crime, foreign terrorism or mass shootings, but rather that they should be careful about how they report on these issues. Journalists should continue to provide accessible information about these issues but refrain from capturing the public’s attention through fear in an attempt to gain more viewers. Media organizations should try to report in proportion to reality by having more oversight on their journalists and fact-checking their articles. There is no ethical justification for media fear-mongering the public just to sell more papers and stories, and it’s important for the media to remember that the world is a less violent place than it used to be.