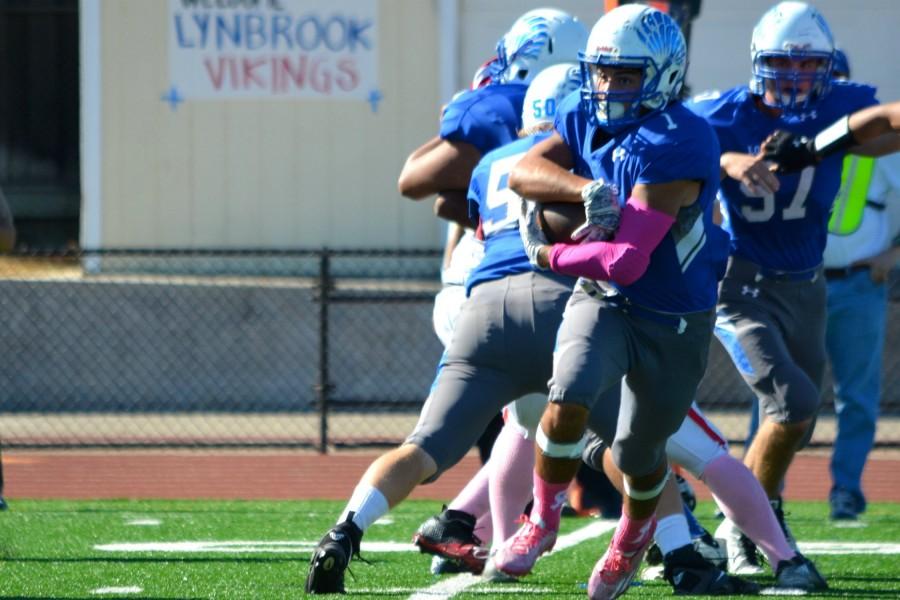 The varsity football team held on to win a high scoring game against Lynbrook today, October 31, by the score of 48-42. The Vikings came in with league record of 1-2, but wielded a very potent up-tempo offense.

The Eagles received the opening kickoff and started off fast. On their third play from scrimmage, senior quarterback Kyle Gounod connected on a quick slant with senior Cristobal Tejada, who ran it all the way to the end zone for a 58-yard touchdown. Following a failed two-point conversion attempt, Los Altos led 6-0.

“It was a great start,” Cristobal said. “I jumped off [and] I thought they were going to catch me, but I guess not… the momentum was on our side.”

The lead wouldn’t last. The Eagle defense looked like it had held the Vikings to a three-and-out, but a late flag was thrown on third down for roughing the passer, extending the drive. Two plays later, The Vikings broke a 70-yard touchdown pass and, after the extra point, led 6-7.

Once again, the Eagles scored early in their drive. On the second play, senior running back Patrick Vargas ran up the middle, broke into the secondary and sprinted down the sideline for a 67-yard touchdown. Once again, Los Altos failed a two-point conversion attempt, so the score was 12-7. The Eagles scored again on their next possession on a one-yard touchdown run, and with the extra point, they stretched the lead to 19-7.

The Los Altos offense dominated the quarter. Kyle finished with 78 passing yards, and Patrick ended the period with 113 yards of rushing.

The Eagles looked to continue the onslaught in the second quarter, driving down into the red zone, but an interception gave the Vikings the ball on their own two-yard line. It only took Lynbrook’s offense three plays to go all the way down the field, capping the drive off with a 70-yard touchdown pass. They scored again on their next possession, taking a 19-20 lead.

The Eagles got the ball back on their own 21 yard line with just over a minute left in the half. Two plays into the drive, Kyle found senior Bailey Thayer for a 34-yard gain to put them in Viking territory. On the next play, Kyle threw a quick screen to Bailey, who sprinted 40 yards to the end zone to give Los Altos a 25-20 lead, which they took into the half after yet another failed two-point conversion attempt.

Despite the close score, the Eagles dominated play in the first half. A balanced Los Altos offense gained 155 yards of rushing and 156 passing yards, while Los Altos held the Vikings to just 13 rushing yards.

The third quarter was all Eagles. Holding the Vikings scoreless on their first possession, the Los Altos offense came on and steadily drove down the field, eating up time and yards before Kyle found Bailey for his third passing touchdown of the game to make it 32-20 Eagles. After a Lynbrook touchdown, Patrick ran up the middle untouched for a 70-yard touchdown to make the score 38-27.

On the next Viking possession, the Eagles’ defense rushed the quarterback hard, forcing a fumble which was recovered by junior Kai Jarmon on the Viking six-yard line. Just one rush by junior Max Higareda made it 45-27.

The Vikings’ offense woke up in the fourth quarter. After a 29-yard field goal by junior Albin Mollerstedt stretched the lead to 48-27, Lynbrook scored two touchdowns in three possessions to narrow the deficit to six points at 48-42. However, Bailey recovered the final onside kick with 1:24­ left, and the Eagles were able to wind down the clock.

The win gives the Eagles a 3-1 record in the El Camino League. Looming large is their next matchup on Friday, November 6 against rival Mountain View at Foothill.

“We’ll be ready to go,” Bailey said. “We’ll bring the boom. Today was a practice for Mountain View. It’s a big game on Friday night, and we’re excited.”