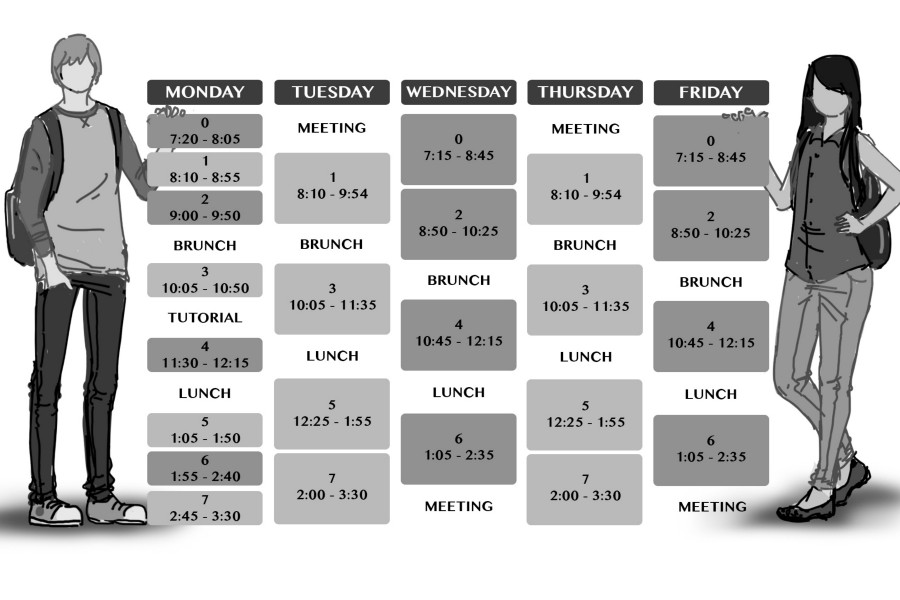 By Teddy Chmyz and David Lisbonne

Last spring a subcommittee of the District Teacher’s Association dedicated to discussing possible changes to the bell schedule decided that it was, in fact, not in the school’s best interest to change to a four-block-day schedule. Such a schedule would have two odd block days, two even block days and one day with all classes. This differs from the current schedule that Los Altos High School employs, known as a modified block schedule, which consists of only one odd and one even block day each week.

The subcommittee decided that the schedule was best left alone, citing studies showing that switching to a full block schedule does not reduce stress, nor does it reduce nightly homework. Perhaps most importantly, they argued that the current schedule does not seem to have anything inherently wrong with it.

“We concluded that we didn’t need a new schedule and that this [current] one is working,” Latin teacher Krista Greksouk said.

Although the teacher’s study of a four-block-day schedule led to the subcommittee’s decision against it, the school should transfer to that form of schedule, being that it would reduce student stress, decrease nightly homework and allow for more in-depth lectures and labs in the classroom.
The optimal schedule would be one that caters to the teachers’ requests, but also, and more importantly, relieves the stress and homework levels students currently experience. Ideally, a week’s schedule would comprise of four block days, two odd and two even, and keep the tutorial time, a valuable resource for both teachers and students. One proposal would be to move the current Tuesday schedule with the tutorial period to Monday, and then alternate block days, starting with the Thursday’s current odd-block schedule. This way, students would have each class three times a week and one day at the start of the week to refresh and check in with every class after the weekend.

Being able to check in with each class at the start of the week would prevent confusion about assignments and their due dates later in the week, in turn reducing the rapidly growing issue of student stress. Teachers’ giving multiple tests on the same day has become an increasingly prevalent stressor for many students. Implementing a weekly schedule that has fewer days with all seven periods would decrease the chances of this happening.

Currently, Monday and Thursday nights are the hardest for students regarding homework load because students have homework due in all of their classes the next day. On the contrary, Tuesday and Wednesday nights are less burdening as a direct result of the block day schedule; students only have three or four classes the next day. By changing the Tuesday schedule to a block day, Monday nights would have a significantly leaner homework load than before — essentially half of the previous load — and Thursday nights would also undergo the same reduction due to Friday becoming an even block day.

This proposed schedule would also allow for teachers to have more time to meet with colleagues and discuss curriculum and teaching techniques. Currently, teachers have two meetings each week: before school on Thursday and after school on Wednesday. At these meetings, they have school-wide discussions, workshops or individual department meetings. In the new schedule, there would be another even and odd day, which would allow there to be two additional teacher meetings. This is something teachers have expressed a desire for and would help improve communication and collaboration between teachers.

“We looked at what people said they wanted, which was more meeting time,” Greksouk said. “[They wanted] time to collaborate with colleagues.”

Many students at school are subject to too much stress and by simply altering the layout and makeup of the weekly schedule, student stress would immensely decrease. In addition to the lowering of student stress levels as a result of spreading out tests during the week, changing to a four-block-day schedule would also decrease the average nightly homework load, as well as allot more time for in-depth lectures, labs and general department meetings. The benefits of this schedule for teachers, students and the district as a whole prove that the transition should be made toward a four-block-day schedule for the overall betterment of our school.