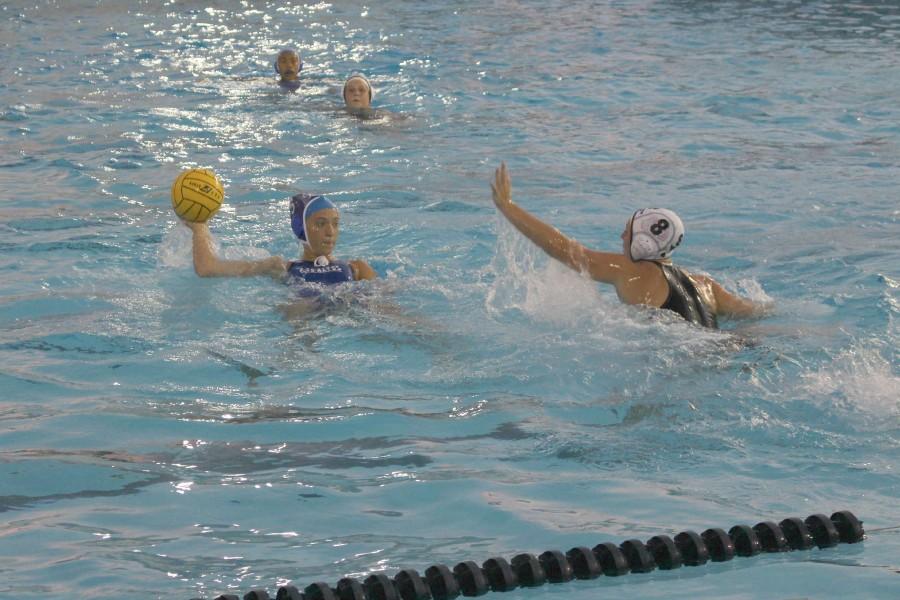 On Thursday, September 23, varsity girls water polo conquered Mountain View 10-7 in a heated battle that showed both strong offense and defense from the rivaling teams, especially in the third and fourth quarters.

“I think we worked really well together and we were able to communicate a lot in there, which really allowed us to shut down their offense,” senior team co-captain Ellen Roper said. “That’s been our focus the entire season because when we work together, we don’t let any of those mistakes through and we can shut down their best players.”

The first quarter was a power struggle between the teams in which many fouls and turnovers littered the pool. Mountain View scored the first goal with 6 minutes left in the quarter and halfway through the quarter, sophomore Julia Santos scored, tying the score at 1-1. Followed by a goal from senior co-captain Christina Pao, making the first quarter score 2-1, with the Eagles stealing the quarter from the Spartans.

“They were a rival team that had a pretty good record going into this season, so we were definitely making sure we were going to be cognisant of their good players and their good plays,” Christina said.

In the second quarter, both teams cleaned up their offense with Mountain View scoring at 2 minutes into the quarter and the Eagles scoring a minute later, making the score 3-2. The Mountain View girls caught up at three and a half minutes into the game, tying the score at 3-3. As the quarter came to a rapid end, Ellen Roper scored a buzzer-beater goal, sealing the second quarter win for the Eagles.

“The turning point was when we adapted our defense in the third quarter to kind of make sure that  we were helping back in whole set,”  Christina said. “Other than that, I think we were also just getting more movement in offense and starting to swim them on our counter attacks.”

“I believe that we started [slow] in the beginning, but as time went on, especially in the third quarter, we pushed the counters, we pushed the defense,” sophomore Julia Santos said. “We did not allow silly mistakes from our offense or defense and we didn’t allow the other team to make minute drives or get those last minute shots in. We improved throughout the game.”

In the final quarter the eagles started with the ball and Ellen scored with an assist from Christina, leaving the score at 8-5. The Spartans were not going down without a fight, and scored the next two points with 3 minutes left in the game.

“I think the hardest part was trying to adapt to their play,” Christina said. “We hadn’t really known too much about them going into this game, but they definitely have a strong team this year. We didn’t know what to expect, but I’m really glad we were able to pull through in the end.”

Julia scored once again in the fourth quarter, securing the lead at 9-7, and a minute later, Ellen scored with and assist from Annalisa, taking the win for Los Altos with a minute left on the board.

“They played like a [great] team and that’s really what we’re trying to do,” varsity head coach Katie Buzzetta said. “We are trying to win games by not having just one or two scorers, but having it spread all the way across the board and having every single player that’s in the pool influence the game.”