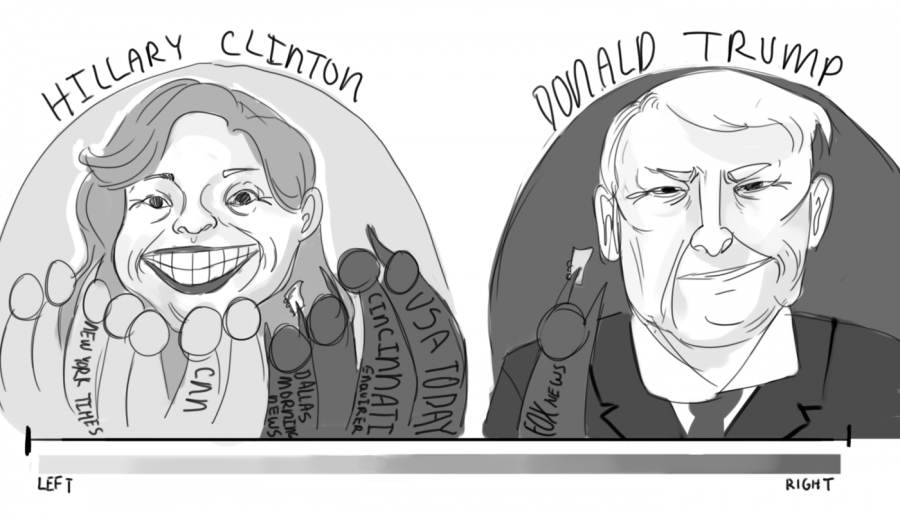 In the world of media, there is no such thing as an “unbiased” viewpoint. Bias shows up in videos, articles and even headlines, and often, it isn’t hard to distinguish a liberal article from a conservative one just by the news outlet that published it.

We can’t control what will show up when we type “2016 presidential election” into Google, but we can control which link we click on. And frankly, whether we click on FOX News or CNN will largely depends on what political party we are affiliated with.

The issue that develops from our dependency on the media for political news is that media bias has a much more sizeable impact on voters in an election, especially in terms of how a candidate’s character and experience are evaluated. It becomes even more apparent when we look at this year’s election — Trump and Clinton are two candidates with diametrically opposed viewpoints, and both have received the bulk of media coverage from news outlets that lean to their respective parties on the political spectrum.

Many outlets that lean left or right have fully expressed their support or disdain for a particular candidate, whether the support has been seen through articles or even in a direct endorsement. The New York Times, for example, endorsed Clinton in September and their mostly liberal audience would probably agree with the endorsement. But, the newspaper also has a significant moderate audience, with the Pew Research Center reporting that 29 percent of The New York Times readers are “mixed” between conservative and liberal, and they also trust the source as place to get information.

The power of the media is shown here, where an endorsement has the potential to shift the views of millions of voters that are relatively undecided when it comes to who to vote for. This kind of endorsement could shift previously mixed voters to a group called “mostly liberal,” which currently makes up 61 percent of the newspaper’s audience.

To some extent, we can assume that an endorsement of a liberal candidate from a liberal newspaper isn’t really that surprising, and its effect can be significant. But, it’s much less difficult to get moderate voters to lean one way or the other than changing the mind of a “mostly conservative” voter.

That’s what makes 2016’s election so interesting — it has become somewhat of an anomaly, a time when one candidate is so outrageously controversial and “bad” enough that he has spurred protests from members of his own party. This has been seen in the news as well, with traditionally conservative outlets such as the Cincinnati Enquirer, USA Today and The Dallas Morning News expressing their support for Clinton, or in USA Today’s case, an endorsement for “not Trump.”

The Atlantic, which has notably stated that they are an “organ of no party or clique,” has diverted from this position three times in the past. They’ve only endorsed three candidates in their 159 years. The first two were Abraham Lincoln and Lyndon B. Johnson, both Republicans. The third time, in an article titled “Against Donald Trump,” they endorsed Hillary Clinton.

These outlets have taken hard stances, as shown by the phrasing of their various endorsements. The Atlantic called Trump a “a demagogue, a xenophobe, a sexist, a know-nothing, and a liar.” USA Today said that he was “in a league of his own when it comes to the quality and quantity of his misstatements.” Others, such as The Dallas Morning News, endorsed their first Democratic candidate in 75 years.

These endorsements are bad, but not necessarily because they’re influencing voters to vote for a liberal candidate over a conservative one. The main issue is that it doesn’t always work that way — dedicated Trump supporters will continue believing that each endorsement of Clinton is a media conspiracy against their beloved candidate.

At the same time, it’s good for voters who might be able to approach the situation from a more rational point of view. A political party affiliation can still be held by voters without having to bind themselves to a certain candidate who is unfit to be president. At the same time, they don’t have to completely lose their conservative views. The Atlantic, USA Today and The Dallas Morning News have shown that.

It’s okay for dedicated Republicans to be influenced by the media and to vote for Clinton. There is no reason to believe that the Republican party must stand by someone who is racist, sexist and rude in order to maintain a conservative viewpoint. At the end of the day, Americans should be looking to preserve democracy, equality and respect the very ideals that this country was built on.

If that means voting for a candidate of the other party who has outperformed your own — so be it.